TRACKING DOWN A WILD DOG DEN 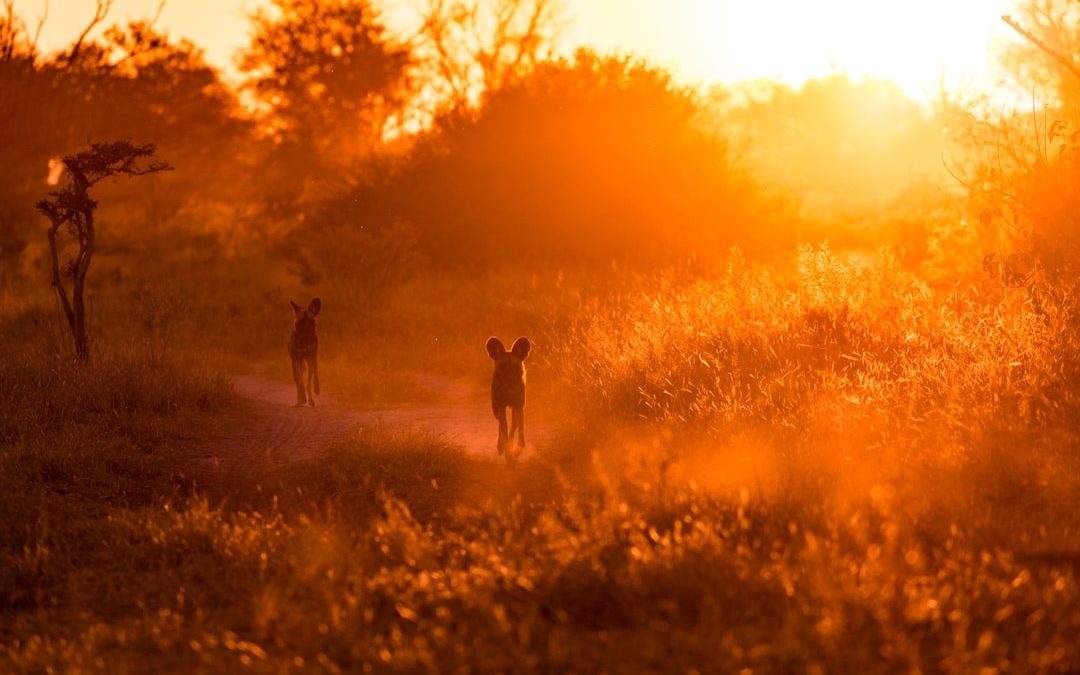 The winter months of June, July, and August mark the coldest period of the year in Northern Botswana. It is this cool period of the year that African wild dogs choose for whelping, as pup rearing is energetically costly for a pack. Typically, the dominant female looks for a suitable den site, such as an abandoned aardvark hole, where she will give birth. As the mother is obliged to stay at the den to nurse and protect the pups, so the survival of both the mother and pups is fully dependent on the other pack members during this critical period. The rest of the pack all leaves the den site once or twice per day to go hunt, and upon returning, they regurgitate part of their freshly caught meal to feed both mother and pups.

During the denning period, the normal ranging radius of a pack is drastically reduced. Consequently, denning season is the optimal time of the year to locate the study area packs and for pack monitoring. This July we tried our luck to locate the densite of the missing ‘Mula’ pack. This pack was formed in February 2016 by the joining of a male dispersing group with a female group, each of which we had monitored with satellite collars as part of our ongoing research project on African wild dog dispersal. However, these expensive hi-tech satellite collars both had dropped off by the time the pack had settled into a new territory. As we are also interested in the settlement and reproductive success of recently formed packs, it was critical to catch up with this pack again.

Having no working radio telemetry collars on the pack we were left with with no other option than to track down the pack on the ground the old-fashioned way. We already knew that the new Mula pack’s home range extended from Xakanaxa all the way east along the Khwai river to Moremi North Gate. This meant they could theoretically have been denning anywhere within about 400 km2 and along a stretch of about 50 km. We decided to start our search mission in Xakanaxa where frequent sightings of 12 wild dogs had been reported on the sightings board at Moremi South Gate. The last time we saw ‘Mula’ pack, at the end of 2016, they were ten adults plus two pups. Therefore, these reports sounded promising.

With enough supplies to spend a couple of days away from our research camp, Ed, a BPCT Research Technician, and I set out for the 50 km drive to Xakanaxa. Upon arrival, we bumped into some safari guides who told us that they had regularly seen a pack of 10 wild dogs and one male was wearing one of our radio collars. Luckily, one of the guides had just seen the pack earlier that morning. Using this information, we started looking for fresh tracks on the main road and soon found some. The prints were following the road for roughly 3km but eventually they left the road and we lost their tracks. We decided to park our LandRover close to a crossroad to see if the pack would use the same road on their way out of the presumed den site for the evening hunt. 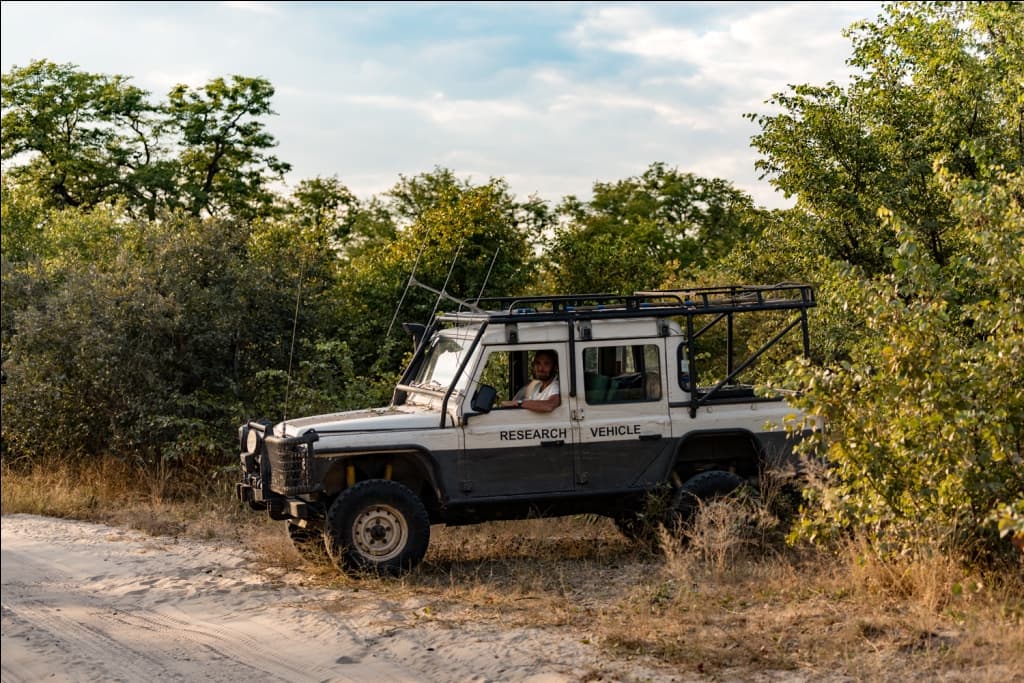 Figure 1: Our car parked next to the road in anticipation of the ‘Mula’ pack coming along on their way out of the presumed den site.

Being impatient, we left our lookout before sunset and looped around to the North the nearby Paradise Pools to search there. With no success, we drove back to the crossroad to find out that the pack had just come by, as indicated by the many fresh tracks on the road. We rushed following the tracks and caught up with the pack shortly after. They were spaced apart and due to the progressing darkness, we were not able to count more than eight individuals.  As we were taking photos of them for identification, one of the dogs who was lagging behind suddenly turned back and sprinted down the road toward where they just come from. We followed him as we guessed he might have changed his mind and decided to return to the den. He ran down the road at full speed, coming by our stake out place at the crossroad and then continued heading further south. Then suddenly, he turned east into the thick mopane bushes. It was too dark for us to try to follow him through the thick vegetation, we took a GPS fix of where he turned off and went off to find a suitable spot to spend the night. Later that evening we confirmed by examining our photos, that these were indeed the remaining members of of Mula pack. 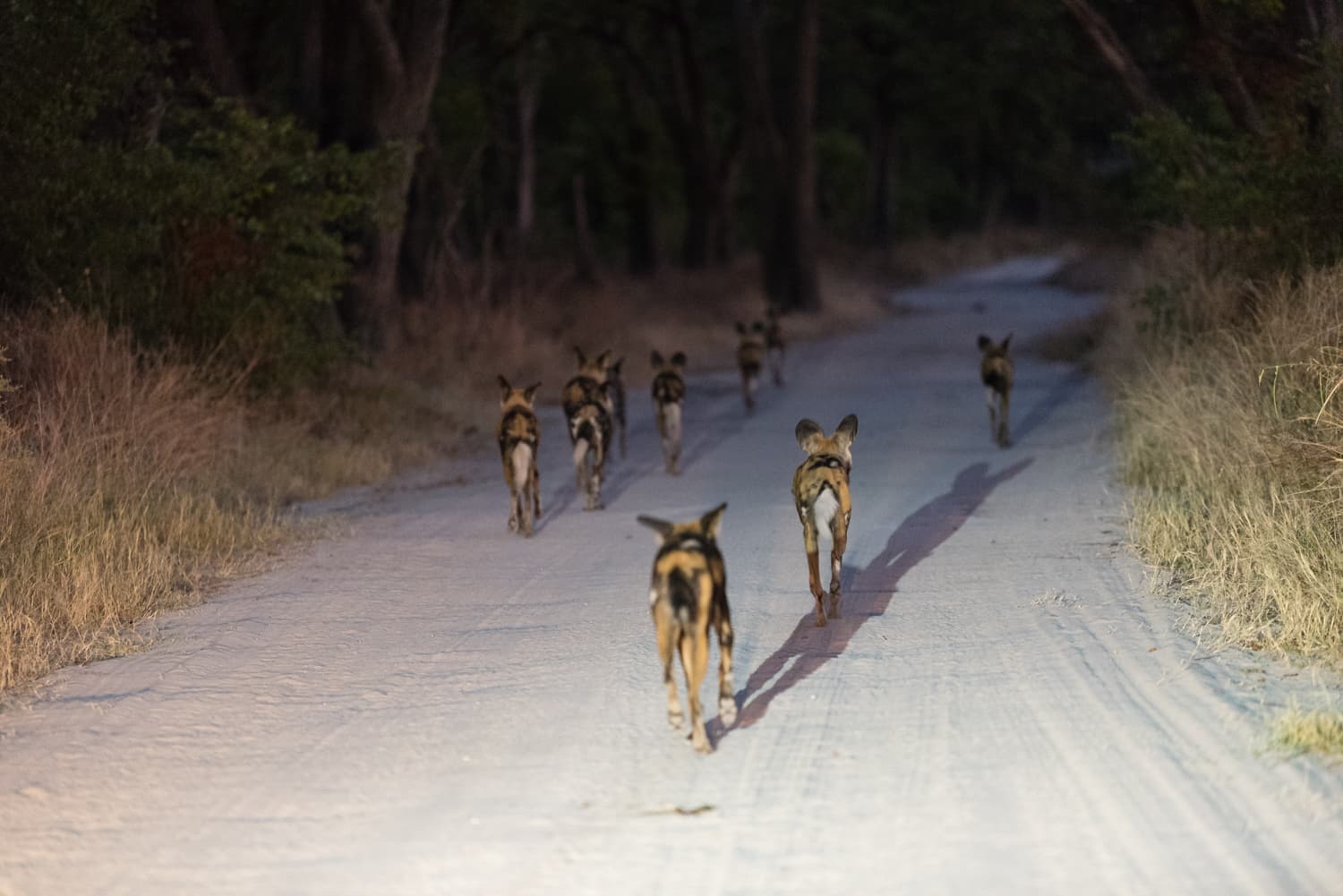 ‍Figure 2: Our first encounter of ‘Mula’ pack as they were trotting along to road for an evening hunt.

Early the next morning, we positioned the vehicle again at the crossroad in hopes that the pack would come by again. Unfortunately, no dogs appeared and we had to conclude they must have chosen a different route. Just as we were about to leave, another game drive vehicle pulled up and told us they had just seen the dogs back on the airstrip again heading east – which meant towards where we saw them last night. In anticipation that the dogs would continue running in a straight line, we drove south on the main road and parked close to where the extension of the airstrip would intersect the road. Luckily, we were at the right spot as a group of six of them came out of the thicket and crossed the road. We immediately followed them into the bush. Despite many obstacles, we managed to stick with the dogs for roughly 300m. But then, suddenly, we lost them in a relatively open area. We got out of the car and started looking for fresh tracks. There were quite a few prints on a small game trail. By following them, we ended up in a sandy rift with spaced out apple-leaf trees. Unfortunately, the sand was very deep which made it hard to surely identify any of the many tracks as being from wild dogs. 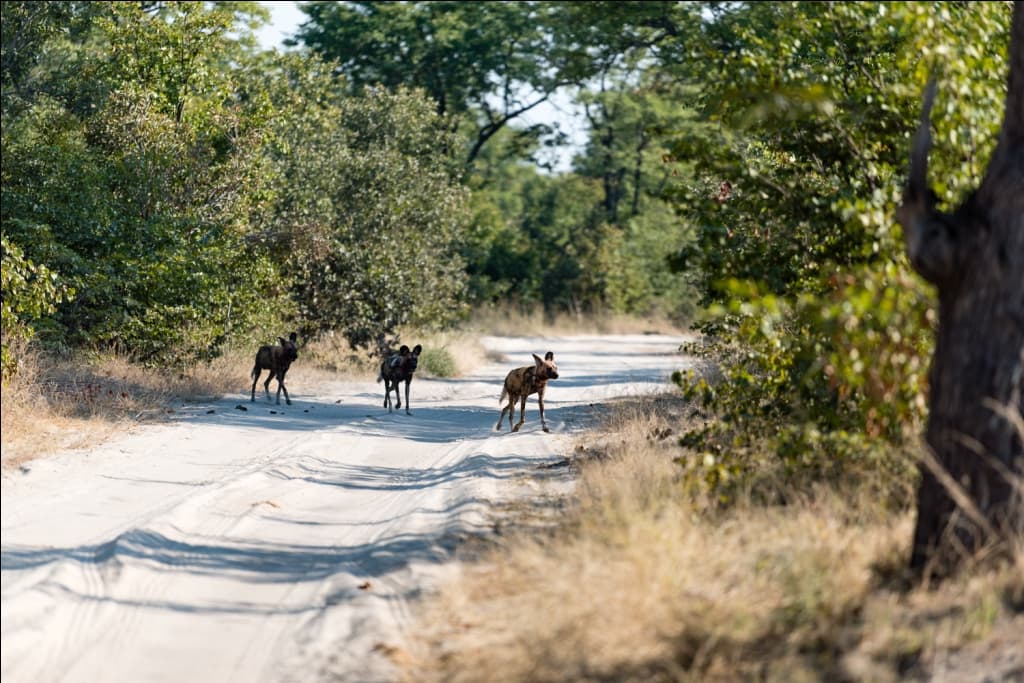 Figure 3:  A subgroup of ‘Mula’ pack crossing the road on their way back to the den site

For the next three days, we continued our search but never managed to close in further to the potential den site. We usually lost track of the dogs in deep sand. As we were running low on supplies, we eventually decided to head back to our researchcamp. But this didn’t mean that we were giving up. Too close were we in finding the den site to call our mission a failure.

A few days later we drove back to Xakanaxa early in the morning accompanied by ‘Tico’ McNutt who has decades of experience in tracking wild dogs. He seemed quite confident in finding their den based on our preliminary efforts in narrowing down the search area. As we approached Xakanaxa, we drove to the spot where Ed and I lost sight of Mula pack previously. Tico got out of the car with Ed and me following. He first circled around the spot in a wide loop in search of any fresh tracks. Once we closed the loop he headed for the direction where he must have seen the most promising tracks. Shortly after, he showed us fresh dog tracks and pointed towards the direction they were leading. After about 1.5 km we approached an open sand ridge. Tico told us to stick close together as he was confident of the den being nearby. We followed the fresh tracks in deep sand, and as we were approaching a few apple-leaf trees we suddenly heard the alarm bark of a wild dog. This was undoubtedly the den site we had been looking for. We crouched down but weren’t able to get a visual of the dog as the trees were quite dense. We decided to take a GPS fix and return with the vehicle.

Impressed by the way Tico tracked down the den in no time, we started heading back. After a few steps, he stopped and showed us animal tracks in deep sand. What seemed like it could have been any track to Ed and me, was definitely the spoor of a wild dog according to Tico. He pointed out that he could detect wild dogs in deep sand based on their gait. Two feet are always placed close together with a bigger gap between the next set of pads whereas the step lengths of hyena prints are generally more regularly spaced. This was an important lesson for us and definitely made the difference as Ed and I were constantly losing the dogs in soft substrate during our previous search efforts.

Figure 4: Wild dog tracks (left) are not always as distinguishable from hyena tracks (right). As the substrate gets softer, details of the paw vanish quickly. We learned from ‘Tico’ that it comes down to looking for gait patterns such as spacing between the footprints in deep sand.

On our drive to the newly-discovered den site we were not able to see more than half a dozen of the adult dogs nor to get a visual of any pups. But when Ed and I drove back to the den a few days later, we managed to identify all 10 adults, the two yearlings, and watch twelve new-born pups play youthfully outside the den. It was well worth the effort:  No dogs had died since our last detailed encounter with the pack seven months ago and a promising number of pups was about to grow up. 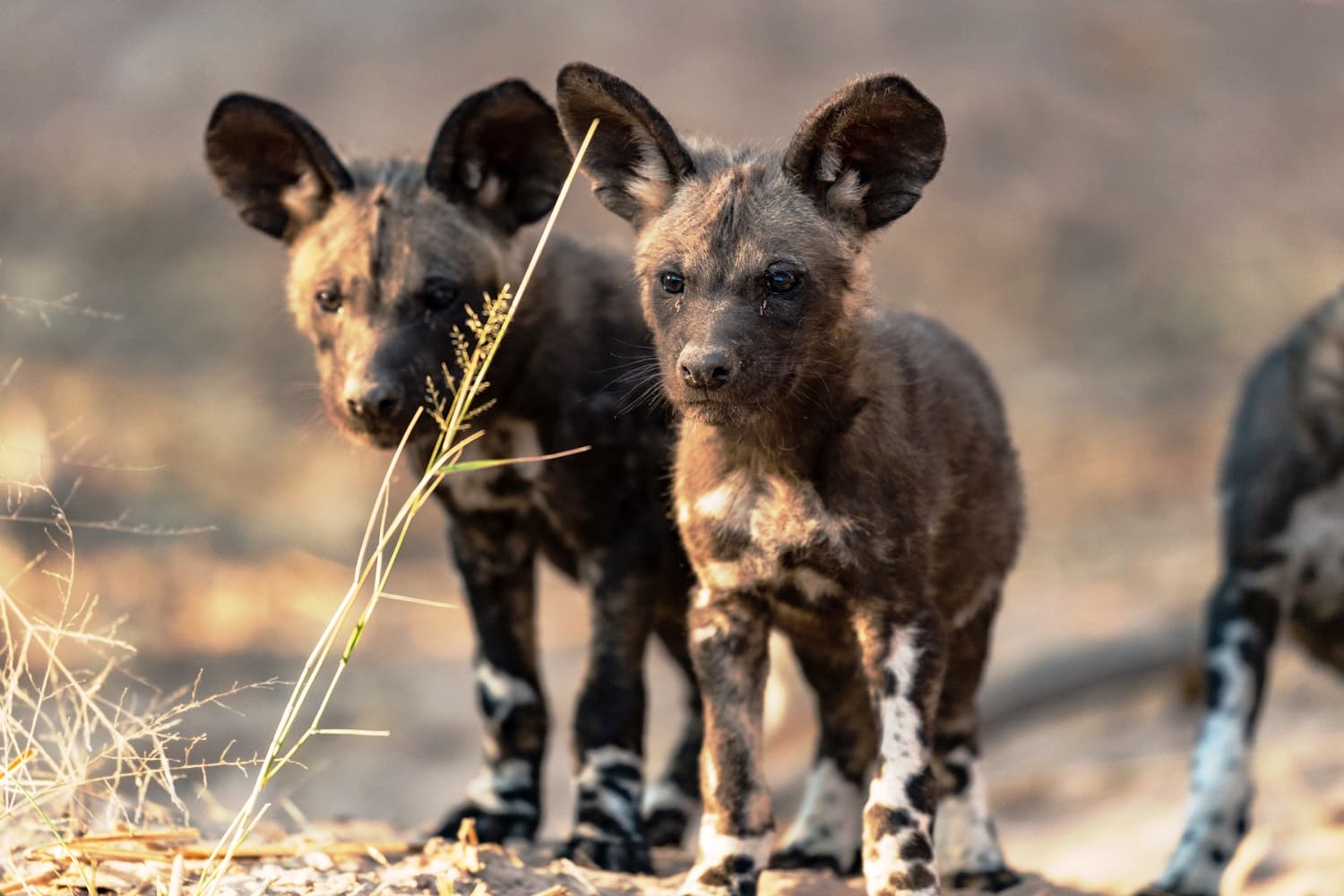 Figure 5: Two of the new-born ‘Mula’ pups explore the surroundings of the den