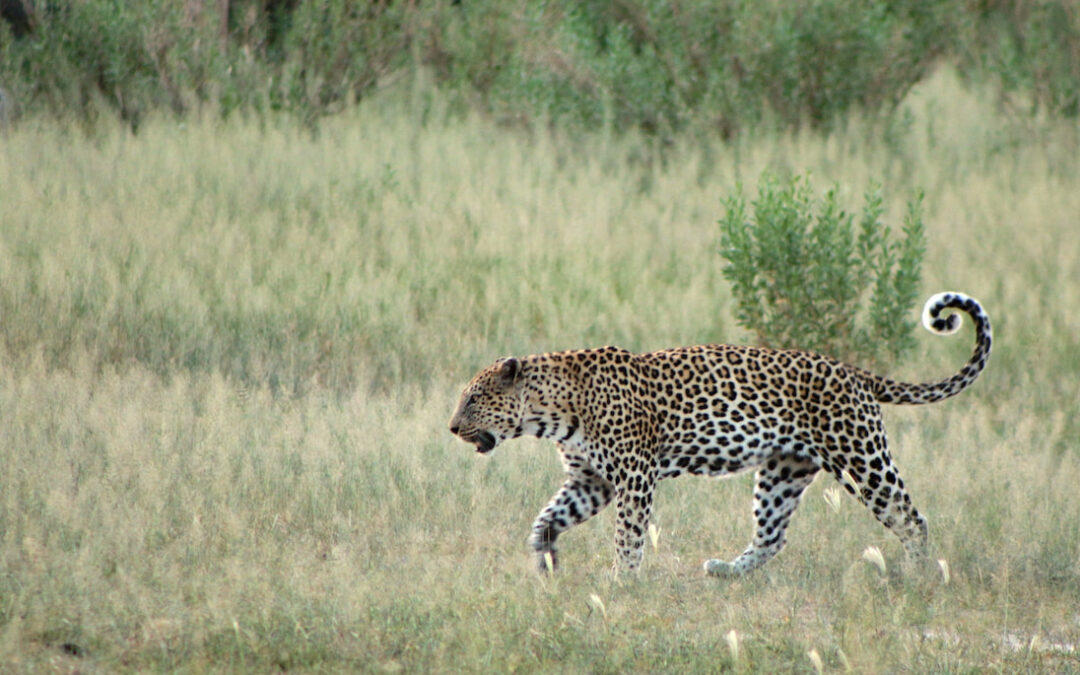 Goose is a leopard, or rather, was a leopard. I would prefer not to admit that he is probably dead, but I think it’s time to face the facts. The last time I saw him on a camera trap was nearly a year and a half ago. Goose was a very special leopard to all those that have passed through Dog Camp; I am no exception. He has been a constant feature of our study area for over 12 years. He was the most relaxed and habituated animal I have ever known.
Goose entered our study in 2007 in a way that has become a legend here because he was first located cannibalizing Maverick, one of our other study area male leopards. Hence the name Goose (from the movie). Goose quickly became recognized 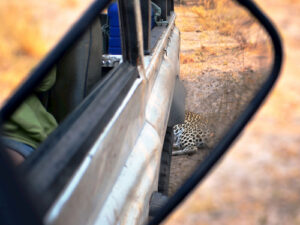 as a new dominant male in the core of our study area – dominance he retained for well over 10 years. It is a dangerous and demanding job being top gun; defending your territory against rival males, scent marking day and night as you endlessly patrol, not to mention the rough and questionably playful courtship with resident territorial females. Goose achieved this all with a confidence and ease that only years at the top could account for.
I first met Goose in 2015. I had a healthy fear of leopards born of trips to the bush in my childhood. I was very aware of the power of leopards, and how quickly they can teach you not to trust them. My introduction to Goose shocked me as a lesson in how much an animal can ignore you. After locating his VHF transmitter signal, I managed to catch up with him while he was on a morning patrol. I quickly positioned the land rover ahead of him, trying to second guess his trajectory to get a side photograph of him for my identification purposes. To my surprise, he changed direction and came straight for me in the open vehicle. Fear gripped me as I instinctively ducked down into my foot well, heart pounding, and adrenaline pumping. Goose however, was completely nonplussed. He could not have cared less. He brushed the side of my vehicle as if I were no more than an oddly shaped bush and proceeded to settle down behind the rear tire and groom himself. Feebly, I unfolded out of my hiding spot and peeped over the side of my car, noticing his indifference. He instantly became my favourite.
Searches for Goose were often characterised by a frustration due to his extraordinary indifference to us. We could search a 50m patch for an hour trying to get a visual sighting, zigzagging, reversing, and constantly checking the transmitter signal to convince yourself. Stop, start. Stop, start. Only when the land rover approached to within 2 meters, would Goose sleepily lift his head from under a bush or the tall grass that you had already passed at least 10 times, would you spot him, so well camouflaged until he moved. On one occasion, I had narrowed his signal down to one acacia bush in the middle of a grassland. After circling the bush 3 or 4 times (it was not even that big!) and not seeing him, I turned off the engine to gather my senses and try to make a different plan. I heard a noise to my right and there he was, approaching the rear of my vehicle! He walked up alongside the door of my land rover and stood there looking earnestly around, as if he was looking for whatever it was that I had been trying so hard to find. I have no idea where he had been hiding.

Goose and Gosling resting together.

Over the years we grew to know some of Goose’s probable offspring, and, in particular, one son. This young male was the first male leopard that Goose would tolerate being near. We even saw them sharing a kill once when Gosling was still a subadult. We called him Gosling, naturally. But, as Gosling grew older, their tolerance for each other diminished and we would see them together less frequently, and when they were seen together, there was a lot of impressive deep-throated growling. Although Goose remained tolerant of Gosling, and we never saw them fight, it seemed to us that Gosling was carving out his own territory and much of that was with substantial overlap with Goose’s. We used to joke in the camp, anthropomorphising their father-son relationship: that Goose gave everything to raise his son, but that when the time came, Gosling would let his ambition takeover, and he would strive to remove his father to take over the territory: a contrived narrative straight out of stories about kings of old.
A few years ago, when the batteries in Goose’ transmitter expired, we decided not to renew it, given his age and the risks involved. I thought this would be the end of our regular monitoring of Goose, but I was happily mistaken. I was overjoyed when it turned out we would continue seeing him regularly on one of our camera traps. In fact, through the cameras we could still monitor Goose’s ranging, although not as frequently or in as much detail as when we could track him using telemetry. A few years passed in this way without ever seeing him in the flesh, but I was content knowing he was still out there, ruling his kingdom. But gradually over time, I started to see Gosling more frequently on the cameras, and Goose ‘çaptured’ less. One day late in 2018, we picked up another big adult male leopard on a camera trap we would typically expect to see only Goose or Gosling. We knew this leopard as Thaba, but had never seen him on these camera locations before. Thaba’s presence in Goose/Gosling territory had to be interpreted as a challenge to Goose’s dominance there. And in February 2019 I saw Goose strolling past the camera trap for the last time. He has not been seen since. 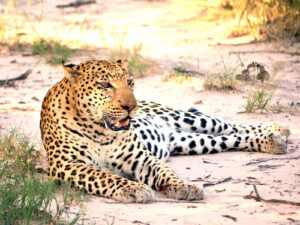 I still see Gosling, who by now has grown into a formidable male, and whether we were correct in our Shakespearean predictions that Gosling killed Goose, or whether Thaba played a role, we will never know. We do know that Gosling has inherited the majority of Goose’s old territory and the area around the camera traps now appears to be a boundary area, and possibly contested because we now capture both Gosling and Thaba on the same camera trap locations. We continue to monitor the life histories of our study area resident leopards, but for the present time we only do so remotely, gathering what information we can from our array of camera traps and any opportunistic sightings in the field. And although Goose may be gone, his legacy lives on in Gosling as a Top Gun – at least for now.