THE TURNING OF THE PRIDE 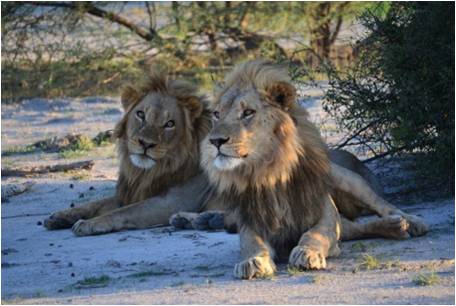 Think of a pride of lions. Maybe its not the most obvious analogy, (brought on by the heat and an active imagination); but hear me out. The rocks are the breeding females, the sand their cubs. The males are the waves. Each new wave is a group of males descending on the pride, trying to change them. Just as a beach is at the mercy of the waves, so the fate of the females and their offspring is dependent on the males. It takes about 18 months for a wave of males to run its course, but some of the females have been the rocks at the core of our local Santawani pride for over 15 years. The males wash over the pride and it’s anyone’s guess how much they will help or hurt. As they storm in they often bring destruction; killing cubs and competition, but in their wake they more often than not leave behind new life. Over the years, this ebb and flow of males has shaped the membership and size of the Santawani pride. It will continue to do so in the coming years but like the waves, we cannot predict when upheaval might occur changing it all and shaping the pride’s future.

Featured image above: Buzz and Woody in 2015

While the females are as familiar to us as old friends, the adult males, in contrast, are ever changing. Female 3 and Female 5 (very imaginative names) are two such lionesses. Already fully grown when they were given their ID codes back in 2006,3 and 5 are believed to be sisters. Try as we might, no other name has stuck for us in the research team; it’s probably just been too long and old habits die hard. Female 5, or Mmamoriri as the local safari guides call her, is a bit of an oddity. She has a mane, is larger than other females, and is infertile. She helps her pride survive by fiercely defending her family, but she is evidently unable to help it grow. This is where Female 3 steps in and has been the super mom. Over the years she has been so successful in raising her cubs that every breeding female in the Santawani pride today is her daughter. This is an amazing feat when you consider that lions under two years old are vulnerable to infanticide, and new males descend on the area from elsewhere nearly every year and a half. Aside from Female 3, the breeding females in the Santawani pride are Twee, the eldest born in 2008, and Mowana and Mochaba born in 2010.

If the tenure of pride males is too short, the arrival of new, often infanticidal males reduces the likelihood that any young offspring will grow to sexual maturity. Since the longevity of a pride is based on successful matrilineal productivity of female offspring, an absence of young females results in an increasingly aging group of breeding pride females and can mean the eventual extinction of the pride due to old age mortality.

From our long term records we can see males with new names like Mike and Doohan, Ghost and Darkness, sometimes larger coalitions such as Donatello, Michelangelo, Raphael and Leonardo. The records clearly reflect the frequency of new pride males passing through. In fact, we have around 80 individual adult males in our database since 2007. Some of these drifters challenge the resident adult males, often fighting to their death. Others pass through almost unnoticed, searching the already full landscape for females and a space of their own. Since my time at camp starting in 2015 I have a personal knowledge of the males that have been influencing the Santawani pride ebb and flow. Early 2015 was the end of the reign of the “Troyalition”, as we called them; Hector, Achilles,Priam and Troy. These four dark maned boys stayed around for almost 2 years before they left the Santawani pride seemingly voluntarily. They moved north to Xini and took over the large pride there, timing their arrival with many younger females coming into oestrus for the first time. The Santawani pride had 7 cubs and 4 sub-adults at that time, – whose fathers had walked away from them. This left them vulnerable to new transient males looking for a pride of their own. With out the protection of fathers, the adult females would have to defend their cubs from incoming males. Male lions are notorious for killing rival males’ cubs,driven by the instinct to expedite access to reproductive females in order to spread their own genes. The Santawani cubs ranged in age from nearly 2 years old (4), to just over 6 months (3) when the Troyalition left. The sub-adults were coming up to 3 years old, and they all disappeared from the area not long after new males arrived. The new males were called Buzz and Woody. These two fairly young adult males walked into the “empty” range uncontested and took over the pride females as their own. On the first sighting we had of these males, Buzz was resting next to a freshly killed young Santawani cub. The females had little recourse with cubs that young. We never saw any of the Santwani cubs again and assume all 7 were killed. 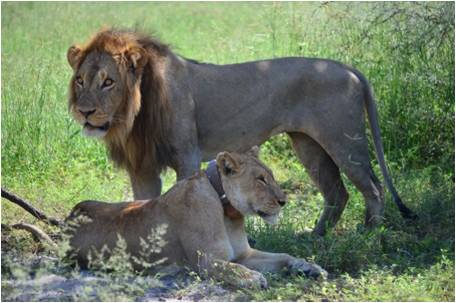 As harsh as the start of their pride dominance seemed to be, Buzz and Woody grew on us researchers. We began to recognise their individual roars in the night as they patrolled their new territory, and we even worried about their well-being when the Troyalition briefly came back South and gave them a hard time. In their coalition, Buzz was the fighter and Woody was the lover. It became a common sight to see Woody resting with the females, and Buzz a few 100 meters away, seemingly just following his brother around. In time, Buzz was able to mate with some females, and both of them had shared paternity of the new cubs that eventually arrived. When you saw the whole pride resting together with their cubs, it was quite a scene of a healthy family. 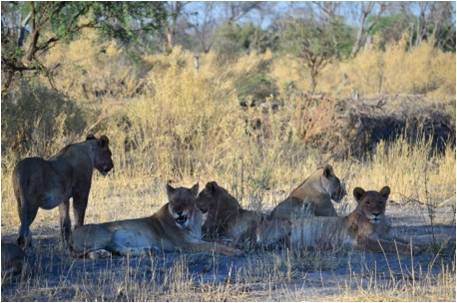 But after 3 years at the top of the Santawani pride, Buzz and Woody began showing their age. Buzz was often injured and very battle scarred, Woody was less scarred but still showing some wear due to the years. In June last year, Buzz simply vanished. After 3 years in a coalition with Woody, it was incredibly unlikely that he had moved on alone, so we assume he had been killed which left Woody alone to defend his pride of 5 breeding females and 8 almost sub-adult cubs (5f and 3m). The tide was starting to turn again for the Santawani pride. Woody still roamed his territory alone, roaring into the night, resting with the females by day. After 4 months alone, 2 new males appeared; younger,and a lot bigger. We named them Columbus and Cortez; the Conquerors.

The takeover was fairly swift, with Woody shifting his range northwards to avoid the new males almost immediately. But the Conquerors eventually caught up with him leaving him with a large injury on the spine of his lower back – a not uncommon injury indicative of a fight with other lions. The last time we saw him was February of this year, resting alone on the fringe of his old territory.

In the meantime, the Santawani females had scattered, while Columbus and Cortez patrolled their territory roaring and looking for them. After 3 months in the area, we eventually found the Conquerors mating with Female 5. A couple of months later, we saw Columbus mating with Twee, one of the younger females. From then on we rarely saw the new males, occasionally with a female, but the rest of the pride would be together somewhere else with their young adults offspring. It was a bit of a game of cat and mouse, a single female breaking off from the others to mate with a male, satisfying them enough so that the subadult Santawani pride males could remain with their mothers. The younger males are the most vulnerable of the pride at this stage in life; not yet old enough to be completely independent but old enough to be considered a possible challenge to unrelated males. Young females had better odds; nearly reproductively mature it was more likely that Columbus and Cortez would tolerate them, as future breeding opportunities. The slightly longer tenure of Buzz and Woody had enabled these females to grow up, making them safer from incoming infanticidal males looking. 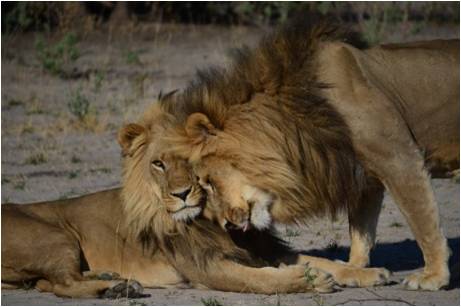 About the same time that we last saw Woody, we also recorded 3 new males in the outskirts of the Santawani territory. These males were big and in prime condition, and they were very aggressive. We called them Deneb, Altair and Vega; the Eagles. As the months wore on, we started seeing the Conquerors primarliy Columbus, with injuries and wounds, . The Santawani females were hiding more than ever during this period, staying far to the South and the East of their usual range, while the Eagles stuck to the West towards the Gomoti River, with Columbus and Cortez in the middle. It became apparent that the Eagles had pushed out three males that were dominant in the neighbouring pride so seemed to be staying there, but occasionally would try their luck with the Santawani pride females. Occasionally, in our study area male coalitions have successfully “controlled” more than one pride of females. Over time, the Santawani females and sub-adults seemed to relax and would be found more often in the core of their range, but still playing their cat-and-mouse game with Columbus and Cortez. 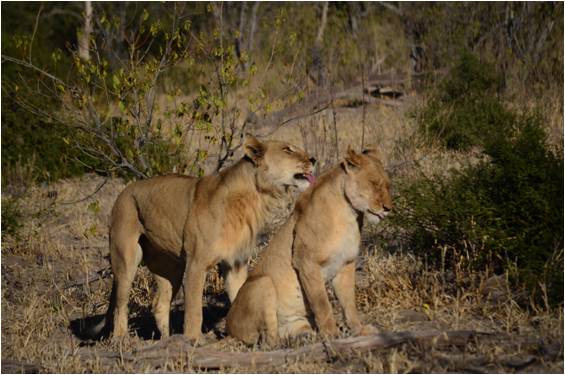 The last photo of Female 3 shortly before she died, being groomed by (maned) Female 5.

Around a month ago, the Eagles tried to track down the Santawani pride once more. The females with dependent offspring became aggressive towards them, acting to protect the young, but Columbus and Cortez, who are unrelated to the youngsters th, did nothing to help defend the females and their offspring from the new males. After one long night of intense roaring back and forth all taking place just behind our camp, we arose to find Female 3, the effective matriarch of the pride, fatally injured and barely alive early the next morning. She died during the day of her injuries, her back broken, severely bleeding from wounds to her hindquarters. While it is unusual for males to kill an adult female, circumstances obviously can and occasionally do result in fatal fights.

Her passing marked the end of an era for the Santawani pride, but also for us at Dog Camp who have known her for years. No longer will we be able to watch her surrounded by her family, the mother and grandmother to the others who would be greeting, and grooming her. The morning Female 3 died, Female 5 roared long and frequently into the day, well after the normal time lions typically quiet down for the day.

Female 3’s death was sad but life and the pride goes on. Twee is now pregnant with Columbus’ offspring, her three female sub-adults (Female 3’s granddaughters) are now almost fully grown; one of them has been mating with Cortez. The Eagles seem to be staying away away nearer to the river and Columbus and Cortez spend mornings roaring and marking territory, just as Buzz and Woody did before them. How long they will remain dominant of the Santawani pride  and how destructive their eventual downfall will be remains to be seen. Just like a wave descending on a beach and then retreating, these males will inevitably retreat before the inevitable arrival of newer, younger and stronger males. How this will impact the pride females will depend on when, but at least for now the pride remains surviving and growing.