Photo 1. Snare removal from the wild doga that was reported by the guides at the Mogotlo lodge.

In early May this year, Mogotlo Lodge, a small tourist camp close to Dog Camp just outside the Moremi Game Reserve, reported that they saw a  new pack of wild dogs and one of the dogs had a wire-snare around its neck. We immediately headed out from Dog Camp to try to find the pack to assess the extent of the snared dog’s injury.  Unfortunately, as they were a new pack with no radio collars and from slightly outside our core study area, on that day we were unable to re-locate them.

We asked the various tour operators who might be in the area where the pack had been seen for any reports of sightings and finally, several weeks later they were seen again. This time we were able to catch up  and keep sight of them until the veterinarian could arrive all the way from Maun – a 3hr drive. We were feeling positive about the timing and logistics on this occasion because the availability of a vet at short notice is not at all guaranteed.  When the vet arrived finally, the next steps were straight forward: dart the snared dog to tranquilize it, remove the snare and attend to the wounds. It was apparent that the dog had been wearing the wire around its neck for several weeks. It had cut through the skin and deep into the muscles causing an infected wound which the vet was able to clean and disinfect (Photo 1). In order to be able to monitor it, we decided to put a GPS/Satellite collar on another adult male in the pack which would allow us to reliably relocate the newly named Dijo Pack, and to gather data on its movements. 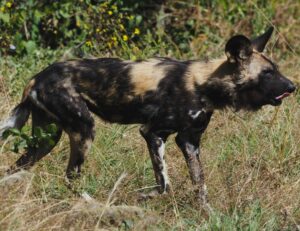 Photo 2. One of the three snared wild dogs that we recently discovered. The wire snare is barely visible as it is tightly strapped around the dog’s neck.

A few weeks later, Alex, a volunteer field assistant at Dog Camp, and I headed out to collect a full set of Dijo pack identification photos. Thanks to the recently deployed GPS/Satellite collar, we knew where they were: easy to reach because they were resting just off the road between Mababe and Khwai village. In any pack of more than 15 dogs, getting a complete set of identification photos can take a lot of time. So, we were busy working on i.d.’s when  Alex noticed that one of the dogs had a wire-snare again. Surprised, we evaluated our options for what to do about it. From  on top of the car we were able to get enough cell phone reception to speak to Dog Camp.  “Not again”, Peter, back in camp cursed angrily, and then started making phone calls to town to organize the vet again. A few calls and a couple hours later Rob Jackson, the vet was flying by helicopter from Maun to our relayed GPS coordinates 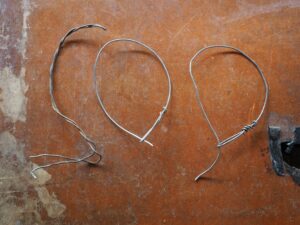 Photo 3. All three snares that we removed that day. They had not been on the dogs for very long and still look clean.

Relieved to know we had a vet on the way, Alex and I continued with the i.d. pictures. While moving around the groups of huddled dog, we kept an eye on the snared dog, but we found this surprisingly difficult as it kept appearing on one side then the other – until we realized there was more than one snared dog. As we focused on this realization, we eventually, realized there were three dogs with wire snares in our i.d. photos! Fortunately, Rob was already on his way! When they spotted us, Dan, the pilot, managed to land perfectly in the Mopane forest, a couple of hundred meters away and a few minutes later, Rob and Dan popped out of the bush and climbed onto our vehicle.  With Rob darting one dog at a time, we managed to get all three snares removed. This time the dogs had not been snared for very long and there were no serious injuries.

Because the dogs were close to the road, our darting and de-snaring activities just off the road attracted several tourist vehicles. Fortunately, all went well and the entire effort was finished in less than two hours. As the last dog recovered from anesthesia, the pack gathered and slowly ventured down the road into the sunset, followed by a convoy of safari vehicles with excited tourists. The mission was a success. 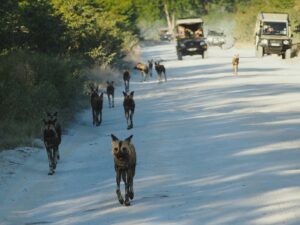 Photo 4. After we removed the last snare, the dogs started to move and prepared for a hunt. The front dog is the dominant male, who now carries a GPS satellite collar that allows us to monitor the pack’s movements remotely.