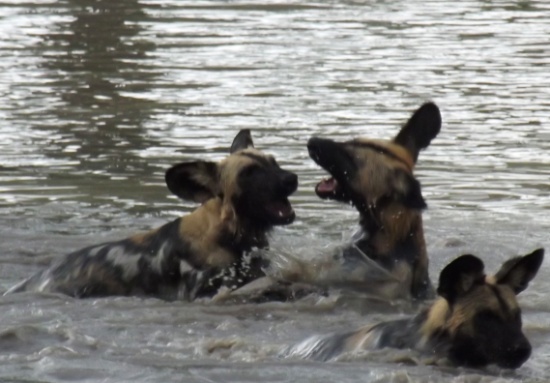 After getting the coordinates for Mankwe Pack, obtained by Tico by aerial tracking, I made my first attempt at sleeping out in the bush. Some dog packs are so far way that it’s just not economic to drive back and forth to camp, so in order to get as much data as we can on distant packs we often camp out close by. Unfortunately, however, by the time I arrived to the fix, some 30km from camp, the dogs had moved off. I searched the area, travelling the roads at dusk, as the dogs do, looking for fresh tracks and a radio-collar signal, but despite my best efforts I did not manage to pick them up. Driving home the next morning, a bit of luck came my way when I spotted the tracks of multiple dogs on the road to Moremi’s South Gate, some 15km from camp. I got out to radio-track and to my surprise, the tracks belonged to Matthew’s pack, a dog pack oftentimes found only a few kilometres from Dog Camp.

Matthew’s pack were clearly enjoying the rain and were in a very playful mood, jumping in the water-logged pans and fighting in the road (basically being really great fun to observe). At this point, all pack members were present, and after a good long observation session, I left them resting off-road in the shade and returned to camp. However, when Neil returned to the pack later that day, three of the older sub-ordinate males – known to us as Claudio, Stetson and Toque – were absent. It seemed that that day they had left their natal pack to try and establish one for themselves and luckily we had had the foresight to get collars on some of them in anticipation of such a dispersal event.

Collaring old subordinate wild dogs is a technique that Tico has used for a while now that has allowed new packs to be found, dispersers to be followed and provided some amazing information of how far wild dogs may disperse in order to pick up a potential breeding mate and/territory. We once had two females travel to the border of Zimbabwe and back to the Delta again, presumably, and worryingly, not finding a suitable mate in all that space in between.

Since one collar was a GPS radio-collar (designed and built by our collaborators at the Royal Veterinary College, London) collecting and storing location data as the dog travelled, we found out that Claudio (3yrs), Stetson and Toque (2yrs) spent many of the following weeks travelling all over Moremi Game Reserve, from Xakanaka to Khwai, back down to South Gate, even briefly returned to Matthew’s pack in a rather aggressive encounter we observed that led to them leaving later that night…

A few weeks later I went out up north in hope of picking up these roving Matthew’s males and to see if they’d had any luck prospecting for females. After failing to pick up any signs on the first day, I decided to sleep out again and search a new area in the morning. Amazingly I got a strong radio signal on the first attempt and minutes later, I saw three dogs running along the Xakanaka airstrip. It was Stetson and Claudio, but the third dog was not Toque. The two males had joined up with a Xakanaka pack female called Lila; a new pack was born.

Wild dog packs have an unusual hierarchical structure; at the top lie the dominant breeding pair, but the subsequent order is age-reversed, with the younger dogs being dominant over their older siblings. I was surprised then to observe that Claudio seemed to be dominant over the younger Stetson. Whilst Claudio and Lila were scent marking their surroundings, as all dominant pairs will do, Stetson was idly watching from a distance.

The future is likely to be tough for this trio of dogs, as they attempt to establish their own territory, and build up numbers.  Three dogs can hunt very effectively, but raising pups to the age of dispersal is a much more formidable challenge.