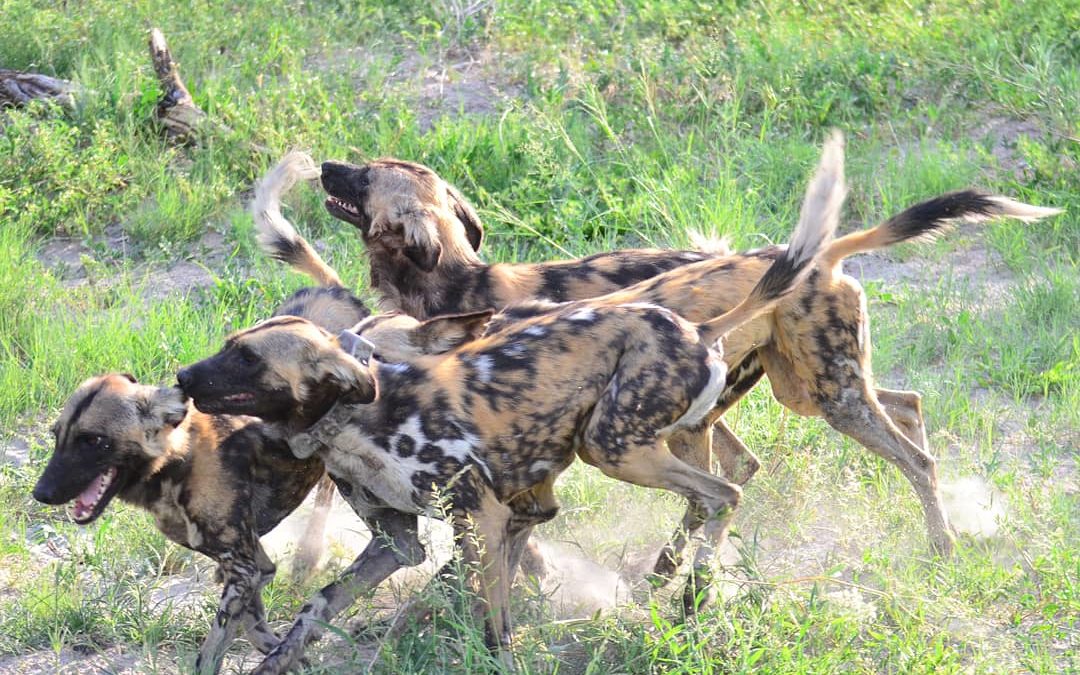 There’s no  way around  it: to investigate how African wild dogs use shared marking sites (what we call an SMS), we need to use continuous recording of activities at those remote sites. To do this we have set up 35 camera trap sat confirmed and potential marking sites around the Apoka pack’s home range and in particular in the boundary areas with neighbouring packs. Cameras are set to record videos, to capture detailed information on which individuals are marking and when, and where. One of the challenges, an actual drawback to this method of recording behaviours is that the cameras don’t only capture wild dogs.They trigger for any passing lions,leopards, impala, mongooses, squirrels, spur fowls, moths, a strong gust of wind. They trigger a lot and to deal with the vast amounts of raw video data these  generate each week, we now have employed Oni,a dedicated assistant in town. Oni sifts through roughly 100’s and 100’s of videos per week, pulling out the empty videos, – those triggered by a moving branch or a few blades of grass moving in the wind. Videos with animals get separated. Those come back to me so I can sift through all of those that have clips of wild dogs. The rest all get filed  by species and stored appropriately, and any clips captured that show other carnivores interacting with the SMSs are also of specific interest and are filed as important records for another research project.

So, I spend a lot of time watching camera trap videos. The videos that include clips of wild dogs are when I really get to work. That’s when I need to identify each individual dog, and transcribe what we have captured them doing; for example, sniffs, urinations, defecations,rubs and rolls, or, sometimes, nothing at all. I record if any of these marks are over the top of a scent mark we know were left by another dog;  an overmark. I also record where at the SMS specific wild dogs are marking. From the number already analysed, I can already see that discrete overmarking locations are being used repeatedly by multiple packs. All of this information is vital to our understanding chemical communication among African wild dogs. It is tiresome and tedious to collect, but what really keeps me going is how these marking sites are enabling us to capture these fine scale details about individual dogs’ life histories. Without this remote data capture we would miss these important details altogether. They enable us to fill in details otherwise unobserved that provide the narrative of specific individuals’ life  story. 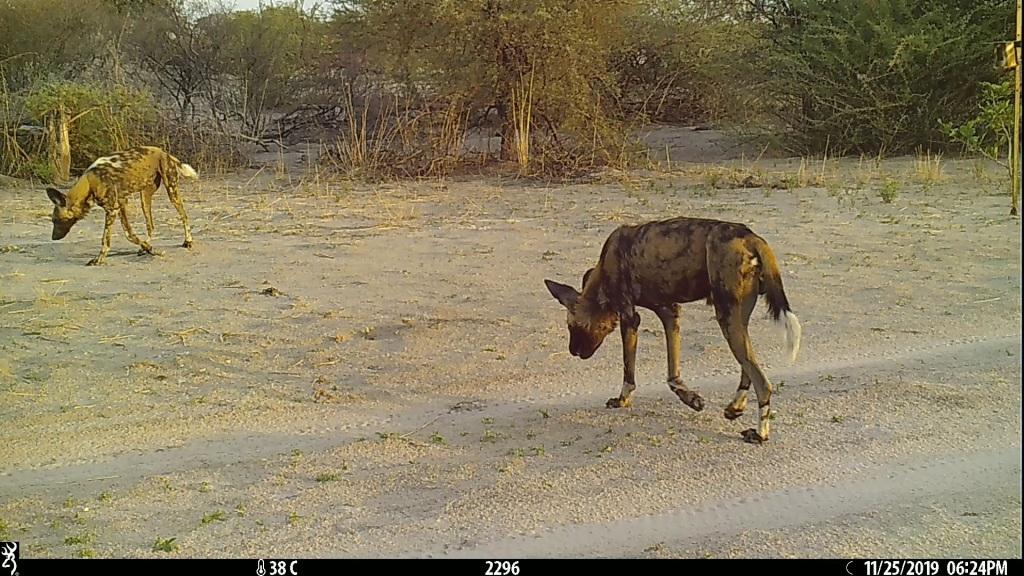 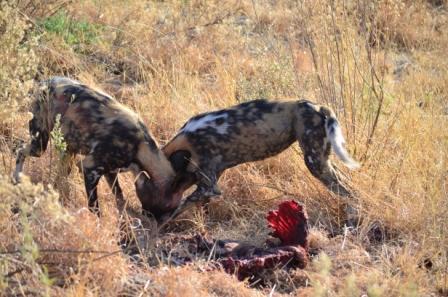 Sahara as a subdominant female with Virunga in Beanie pack, 2018.

Back in the Warrior Pack, Gobi remained dominant, but after 6 months, Sahara and sister Kalahari emigrated, presumably in search of males to begin their own new pack. Kalahari was wearing a satellite collar as part of our dispersal research project, so we were able to follow the two dispersing females more than is normally possible. Because subordinate and older natal dogs often leave to start new packs, we typically put a collar on one of the dominant dogs to keep track of the original pack. Some of these emigrants, also called “dispersers”, will travel hundreds of kilometres, making keeping up with them as part of our long term monitoring impossible. The dispersal research project, however, focuses on such potential dispersers by fitting them with satellite collars specifically to see where they go (see an earlier blog).Interestingly, Sahara and Kalahari only made the occasional excursion far afield only to return, mostly ranging within the border area of Warrior packs’ range. This was nearly ideal for me and the video cameras set up at SMS’s, as this is where I have been focusing the camera trapping; in the overlap zone between Apoka and their neighbours. Almost immediately after their dispersal I started seeing these two girls frequently captured by my camera traps. Initially, just walking past. But then, sniffing and soon after that, marking. They used these sites with increasing frequency until eventually it seemed they were just bouncing from one site to the next;advertising their presence and, presumably gathering information about potential mates. I began following them specifically to see if they would help locate new potential SMS’s for additional camera traps. Following these two was different to following a resident pack. A resident pack sleeps in the afternoons, then rallies and plays before slowly start moving off to hunt. They seem to mark opportunistically at various locations along the way. In contrast, Kalahari and Sahara, used to just get up and go. No rally, no hanging around, just running almost straight to a location where they would scent mark assiduously, sometimes visiting up to 3 marking sites in a day. Such frequent site visits and follows allowed us to record much finer scale movement data than the location data we receive from the scheduled 5fix/ day satellite collar. It also enabled us to see what was happening on the ground, so much more than just a fix on a map which is all we get with locations from the satellite collar. Don’t get me wrong, satellite collars are amazing in their ability to give you near- real-time information about dog locations, drastically reducing search times, but where a dog is at a single point in time is only a very small snapshot of the bigger picture. 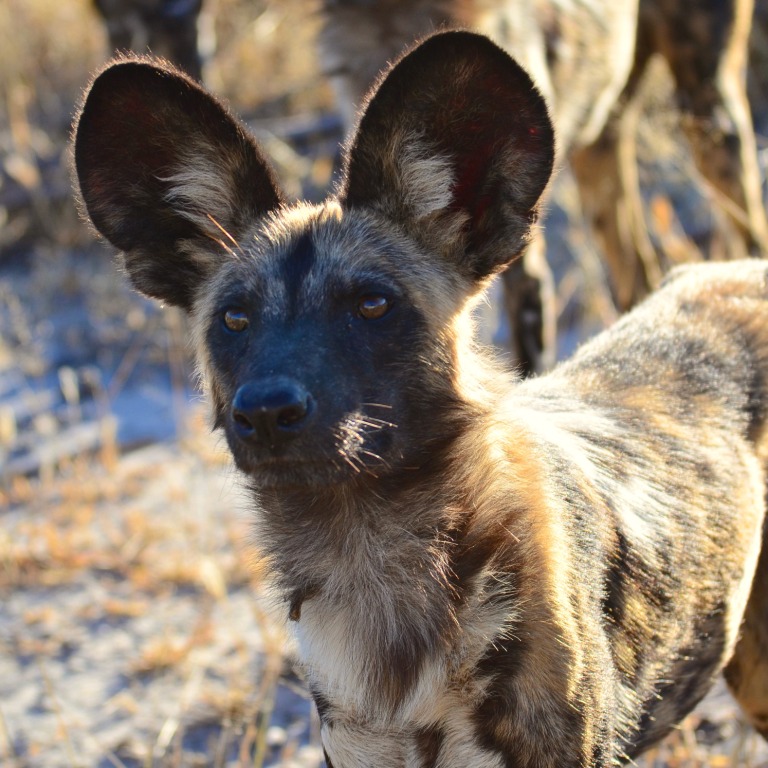 Through the cameras we started seeing some interesting dispersal dynamics between Kalahari and Sahara and, then, from other dispersing dogs. The dispersal process doesn’t seem to be as simple as a group of same sex dogs leave a pack, meet a group of the opposite sex, and form a new pack. There seems to be more to it than that, an element of choice. Through the camera traps, we observed Kalahari and Sahara meeting up with a dispersing male,Ginkgo, from the distant Mma Barbie pack, a male who we know dispersed with two brothers, briefly joined up with our two females by himself, left them and then joined up with another brother who dispersed from his natal pack alone a few weeks later. Without our camera traps, all we would have known about Ginkgo was that he left his pack with two brothers, and a few weeks later the fourth brother left alone. That’s it. It’s a complicated process, and one that we know very little about, mainly due to the difficulty of following dispersing dogs. Our camera traps are helping to fill in the blanks. There’s no telling why potential packs don’t last, but sometimes they don’t. The time that these two sisters spent running around by themselves also couldn’t last; they had to find males. Dogs form packs, it’s what they do. It’s how they reproduce, it’s how they survive. Kalahari and Sahara needed to do the same.

Sadly, the end of the sister’s solo time came to an unhappy ending, when Kalahari died. We don’t know how she died, but we know when with a high degree of certainty thanks to the camera traps. On the cameras, we can see that she was with Sahara on the 8th October 2019 at 12:25. By 4:30am on the same morning, Sahara was alone, seen on a different camera trap. We recovered Kalahari’s collar on the 10th.  We don’t know exactly what happened to her, as her body was too deteriorated to draw conclusions when we found it. The death of the collared dog, usually results in the end of our ability to monitor the surviving individuals. Finding a single dispersing dog is almost impossible. They don’t have a fixed home range in which to focus your search efforts, they can go anywhere, and it’s very easy to overlook or lose the spoor of a single dog. But with the camera traps and her regular visits to the SMS’s we have been able to continue to monitor Sahara.

While this was going on with Kalahari and Sahara, Danakil pack had some changes of their own. Around April 2019 Easter,an unknown female (which is rare in our study population), joined the pack as a subdominant female. Then in July, heavily pregnant Ripley died of unknown causes. Sometime in September, three dispersing females from Mma Barbie pack joined Easter (Ash, Aspen and Birch,). These 7 dogs ran around together for a few months, and, just as we thought they were looking like a stable new pack,the three males vanished. There were no collars on Katavi, Virunga or Odysseus,so we had no idea where they had gone. The four females have remained together,again a group of available adult females trying to find suitable males.

Back with Sahara, the camera traps showed us she was alone initially, as she continued to visit the marking sites. A month after Kalahari’s death, in early November, Sahara appeared with new dogs!Males! Even more excitingly, with the males were Katavi, Virunga and Odysseus! She was back with her former Beanie pack mates, minus both her sisters, Gobi and Kalahari. We called this pack Newbie pack (“new-beanie”). This new and uncollared pack were  monitored primarily by their visits to the camera trap sites, and in early December, another pack change membership shake-up occurred: Odysseus and Virunga joined the four available females from Mma Barbie, plus Easter. These are now technically yet another new pack we call the Spring pack. Katavi and Sahara are still together,  later confirmed by the camera traps. After 4years and 4 packs, Sahara is finally dominant with a male she had previously mated with, but when she was subdominant to her sister Gobi. Only time will tell ifthese two will have more luck than they did in 2018. 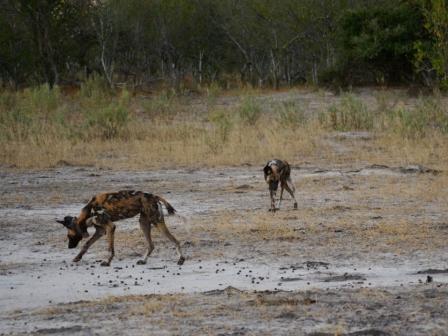 Dispersing sisters Kalahari and Sahara on an evening follow at a newly discovered shared marking site.

For now, things seem to have settled down in the local soap opera-like subpopulation. Apoka, Newbie and Spring packs continue to visit the marking sites, communicating with scent marks directly with each other as they settle into distinct home ranges. The break-up of packs and formation of new, stable packs has been shown to be a more complicated process than previously thought, one that we now have a better understanding of thanks to our camera trap monitoring of shared marking sites.