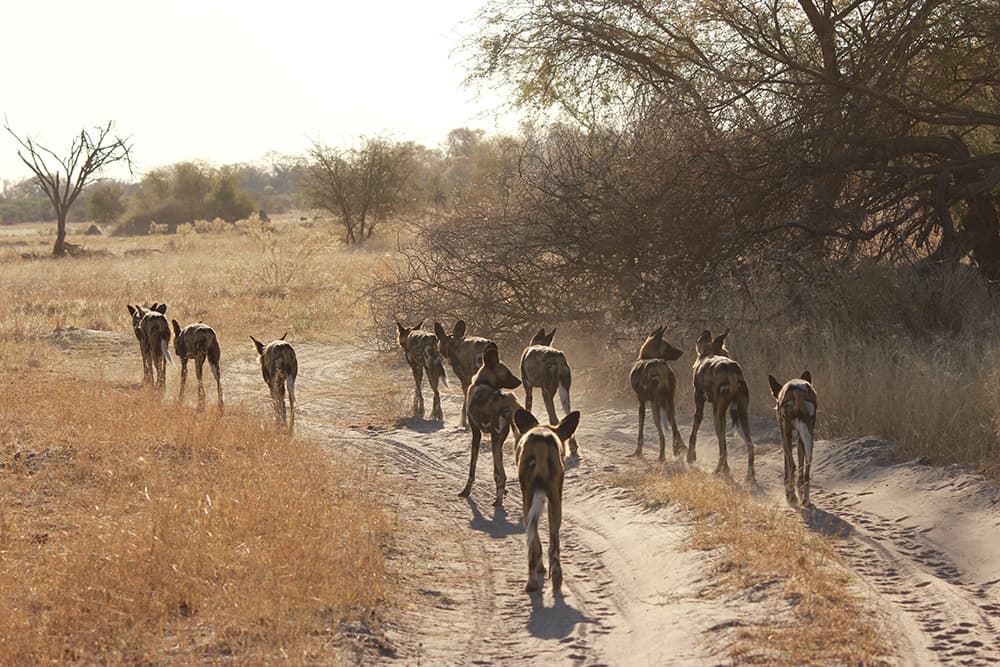 We now know that most of the world’s protected areas are too small to sustain healthy populations of large animals, which require a great deal of space in order to survive and breed. When these protected areas don’t offer enough space, animals will roam outside of these areas to find new resources like food or mates. Unfortunately, animals leaving protected areas often run into numerous dangers, such as contact with humans, barriers like highways, or diseases from domestic animals. If populations are too isolated from one another, animals within a single population may resort to inbreeding because they can’t find new mates, ultimately reducing the genetic diversity in the population.

Of Africa’s prized large carnivore species, the endangered African wild dog needs the most space to survive and as a result has suffered the greatest impacts from the loss and fragmentation of its habitats. In fact, the species now occupies only 12% of its historical range, and is mainly limited to a handful of protected areas (Fig. 1).

Faced with this situation, conservationists increasingly recognize the need to protect or restore the connections between habitats to allow African wild dogs and other species to move from one area to another. The most promising tool for doing so is the establishment wildlife corridors, swaths of habitat that connect core habitat areas and allow the safe passage of animals. In order to know where to protect these linkages, we must first ask “How much land, and what types, do animals need to safely move between habitats?” Thankfully, new GPS collar technology lets animals answer this question for us.

At the Botswana Predator Conservation Trust, in collaboration with the Royal Veterinary College of London, we’ve deployed custom-built GPS collars on over a dozen African wild dogs. These collars allow us to track both individual dogs and their larger packs, and get their precise location every five minutes, around the clock. From this we can begin to understand not only what kinds of habitats African wild dogs need, but also how infrastructure that humans have added to the landscape like roads or fences are affecting their movements. And there’s more: these collars contain novel motion sensors that continuously tell us what behavioral state the animal is in. This means that at any point in time, we can determine if the animal is hunting, eating, traveling, resting, denning, et cetera. By pairing this behavioral information with the animal’s GPS location, we get a picture of which habitats are important for any given behavior.

What we have learned from the incredible dataset we gained from these collars is that what habitat an animal chooses to use, or how the animal responds to a particular feature of the landscape (like a road), greatly depends on what behavioral state it’s in. Just as humans don’t drive over houses nor sleep on highways, animals may not select the same habitat they would for traveling as they would for resting or any other behavior. For example, we learned that African wild dogs avoid the unpaved roads that lattice our study area when the dogs are resting or denning, but, just like people, African wild dogs very much prefer to take roads when they are traveling between destinations (Fig. 2). We also learned that wild dogs are a lot more willing to tolerate potentially hostile environments, like pastoral areas where they come into conflict with farmers, when they are traveling.

This lesson couldn’t have come at a better time for protecting room to roam for large animals in southern Africa. The governments of Botswana, Namibia, Angola, Zambia, and Zimbabwe recently signed an agreement to establish the Kavango Zambezi Transfrontier Conservation Area (Fig. 3), an effort to link 444,000 square kilometers (or 171,000 square miles) between 17 protected areas for the protection of wildlife movement. Protecting linkages for large animals like African wild dogs has the added benefit of protecting connections for many other species that rely on similar habitats.

Through the detailed study of animal movement, we now have the science to support conservationists and governments as they begin planning these critically important wildlife corridors. As pressures from changing landscapes and climates continue to rise, effective corridors will become increasingly important for maintaining the viability of Earth’s wild populations.