FOR THE LOVE OF A DOG

New packs of wild dogs sometimes simply don’t last – potential packs dissolving within a few weeks. But others last for years. How to explain the different outcomes remains an interesting and possibly important question. African wild dog population stability and distribution is largely driven by dispersal, the life history passage by which new packs are formed.  Brothers leave with brothers from their natal pack and sisters leave with sisters and these single sex groups of siblings strike out from their family in search of other dogs with whom to start their own new pack. Sounds simple enough until you factor in the scale of wild dog ranging. Just finding another dog, let alone a group of suitable potential mates to form a new pack in the 1000’s of square kilometres of continuous habitat cannot be as easy as it sounds. Yet, somehow they manage.

In fact, wild dogs have an amazing ability to find each other within a vast wilderness. Dispersal groups of either sex consist on average of two to three  dogs ,but we have seen everything dispersal attempts from 1 to 7 same sex siblings running around looking for mates. This transient dispersal phase of a wild dog’s life is full of risks and ultimately, quite dangerous. Travelling alone,in unfamiliar territory and without the support of the rest of their natal pack,dispersing dogs are more susceptible to ambush by lions and hyaena, as well as the very real dangers of running into territory defending resident packs of wild dogs. Such encounters can be and often are fatal. Some dogs stay close to home, forming a new pack next door to their natal range, others travel far; we have tracked  dogs traveling over 350km in just 9 days in search of mates.

Whatever their dispersal trajectory, they appear to be pretty good at finding other dogs. But finding dogs is only the first step in starting a new pack.  After a sometimes epic journey to find each other, they still need to see if they can stick together. Sometimes we see a newly joined pack but within a month they have split up. From the scientist in me, I cannot see any obvious reason why such relationships wouldn’t last. Looking at it as a person like anyone else, the only thing that comes to mind is that, like us, the bonding of males and females must be driven by some perception of compatibility. Is that emotions?Sometimes we meet someone and things are ok. You get on, but it’s nothing special. Other times, you meet someone and you just know. Call it chemistry,and I suspect dogs have their own version of it. 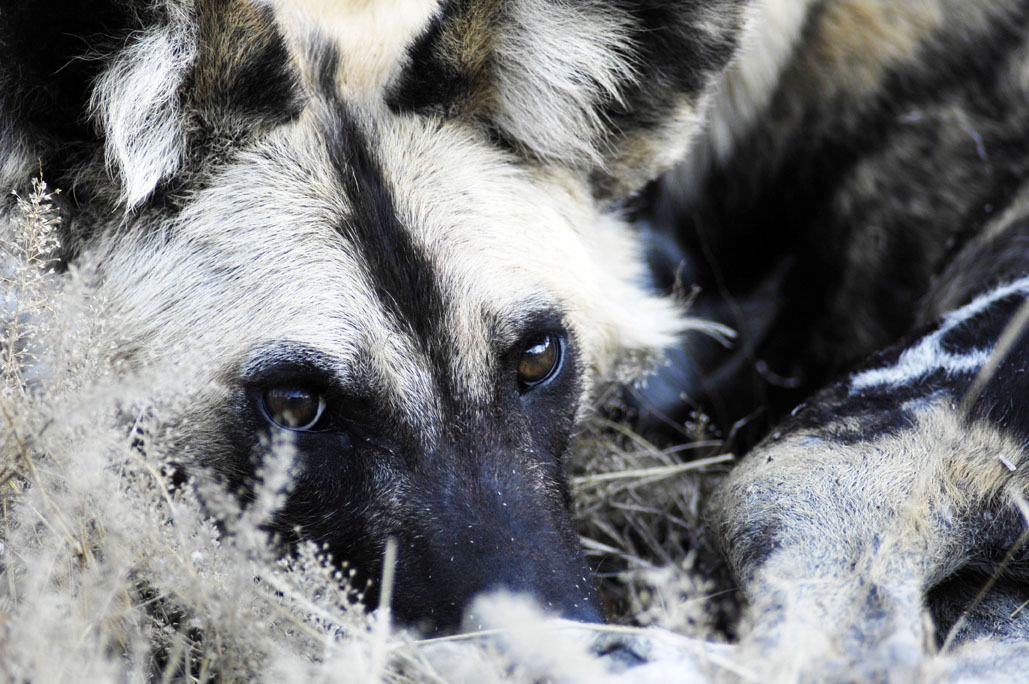 If you think this is far-fetched, hear me out and let me tell you about Seronera and Darius, the dominant pair in Apoka pack. These two have been running around the area centred around Dog Camp since 2013. We have In fact, Seronera was born in the area in 2012 into the very last of numerous Matthew’s pack litters. Our continuous genealogical records of the Matthews pack dating back to 2006 shows that they fragmented in 2013 after the death of the dominant male, Yolo. Seronera was only 9 months old at the time.She was part of a mixed-age group of sisters who stayed in their natal range awaiting a suitable group of new males. They connected with a group of 5 males; Porus, Darius, Cyrus, Xerxes and Gilgamesh, who we assumed were brothers, but who were previously unknown to us. They looked to be about 3 years old (a typical dispersal age for males). During that first year of the new ‘Apoka pack’, Porus and Ganges, Seronera’s older sister, were dominant and had a litter of pups. Seronera and Darius were subdominant adult pack members supporting their respective siblings in raising that first litter of pups. But this all changed late 2013 when Darius fought and won dominance over Porus, and in the next mating season, in early 2014, Seronera, not Ganges, was the dominant and breeding female. Since then, their dominance has been cemented and they have been the pillars of the pack. Over the next 5 years, they have produced 5 litters of pups, many dogs have died, and survivors have dispersed. All of Seronera’s sisters left to form another pack, Gilgamesh vanished, Porus and Xerxes died, after attempting to overthrow Darius in 2017, Cyrus vanished not long after that. In the meantime Seronera has given birth to 48 pups in 5 litters; 33 of these have survived and, so far, 16 of those have dispersed to carry their parental genes as far away as Zimbabwe. Still today, Apoka pack consists of Seronera and Darius, 9 two year olds from the 2017 and 8 yearlings from last year’s litter. Seronera and Darius are the only constant in 5 years of changing pack membership.

Spending time with the pack, the old couple truly stand out. – confident, capable parents surrounded by their children.Their bond is apparent, even from a distance. You never find them far apart,whether they are resting or moving – even when hunting. They have priority access at every kill, but relinquish the privilege when their pups are small by standing back to let the newest and most vulnerable members of the pack eat first. It’s true that sometimes dogs get separated whilst hunting, but Darius doesn’t rest until he is side by side with Seronera. If Seronera is resting in the shade and moves to a new, cooler bit of sand, Darius follows. He is often seen grooming her while the pack rests, or they lie sleeping nuzzled together out of the hot sun. If the youngsters in the pack are having a play by a waterhole, Seronera and Darius are watching over them. Sometimes they too chase and frolic with each other in the water- still young at heart, don’t let their age fool you. In the evening when the pack gets ready to move, when one goes, the other follows. If Seronera is out of Darius’ sight for more than a few minutes, you can see him get restless, looking for her until he spots her, then joins her and appears to relax.

Seronera as a pup in 2012 (right) and Darius and Seronera several years later as the dominant pair of Apoka Pack.

So, here’s my take on this sort of ‘mates for life’ in African wild dogs: For a pack to survive in the long run, I believe that the dominant dogs need this kind of tight pair bond. It’s more than simply a dominant male mating with a dominant female to produce pups. It’sa bond that holds two dogs together and helps them lead their pack, their family, with experience and knowledge and the social respect that is their due.Maybe I’m just romanticizing things, but even someone who spends just an afternoon with this pack can see how such a dominant pair are special. Maybe it’s a hint of this sort of potential bond, a spark that dogs are looking for when they attempt to start a new pack with new potential mates; perhaps they need to find that spark that kindles a fire that can last for years.

Seronera playing with her adult offspring in the water (center right), and with Darius (on right with radio collar), always vigilant while their pups eat.

Seronera and Darius are top dogs, and not just in my book. They lead their family around a landscape they are intimately familiar with, where Seronera grew up, where she must be teaching her offspring the lay of the territory, the area she learned from her parents, and they from theirs.But the reality is that Apoka pack’s days are numbered. Darius is 10 years old this year and very very few dogs in this population have been known live much longer than 11. Like Matthews pack before them, when one of this key pair of  dominants dies, the lifetime of the pack comes to an end. The young surviving members typically split into single sex groups and seek new opposite sex dogs from elsewhere to start new packs. Only time will tell what will happen when the Apoka pack meets this end. Perhaps the females will stay in the area looking for a group of males, as did Seronera and her sisters 6 years ago, or perhaps entirely new dogs will come into this area.Whatever happens, we need to make sure that this species has the space to carry on. Romance aside, if wild dogs vanish from this landscape, something deep and fundamental will vanish with them, impacting not only the ecosystem but depriving future visitors to of something truly special.