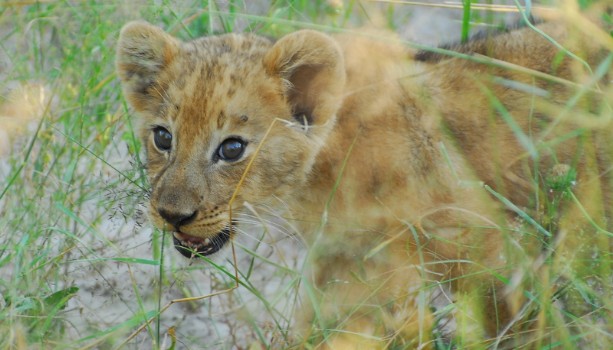 I was lucky enough to join the BPCT as a research assistant at an ideal time, just as several of the female lions gave birth to their cubs. Once a female lion gives birth, she will leave the pride and remain on her own whilst the cubs are small, for the first three months or so. Fortunately, two of these females with new cubs are fitted with radiocollars (Krystal and Valentina), which allows us to monitor the growth and survival of their offspring while they are separate from the pride.

Lion cubs are very vulnerable during this early stage of development and mothers hide their cubs to protect them from intruding male lions and other predators. When we know a female may be with cubs it’s a long waiting game for us, sitting away from the thicket, eyes pinned through binoculars and camera lenes watching, counting tails, waiting for movement. When we first got a head-or tail-count we found Valentina had four cubs and Krystal with just one cub. Unfortunately, unless we push ourselves into their safe haven thicket right after the lioness has given birth (which we opt against) there is no easy way for us to know for certain whether Krystal gave birth to only one cub, or to multiple cubs that had since died. So in this case we accept that loss of data for the benefit of habituation and keeping our observations as natural as possible by not disturbing the animals.

One day when the females were resting together, lying within fifty meters of each other and the cubs now playing and resting out in the open. Krystal’s cub that day seemed to be much more active and alert than any of Valentina’s offspring, despite being a few weeks younger age. Subsequent observation sessions with Krystal revealed that this lone cub was indeed growing fast and acting very responsive to his mother. Perhaps we are witnessing the benefit of being an only cub; receiving all of his mother’s milk. Krystal also started to travel with her young cub much sooner than Valentina, possibly due to the fact that it is much easier to keep an eye on one mobile cub than four! During this time Krystal would emit quiet contact calls to which her cub would reciprocate, he would then approach her, and together they would either move off together or rest together away from the other cubs in another thicket. At this stage Valentina and her four older cubs still stayed and would always be found resting in the scrub not far from their birth thicket.

One morning, whilst Neil was tracking Krystal, her cub now 4 months old, he found a foreign coalition of three large adult males very close to Krystal’s signal. Non-resident males are a danger to young cubs and will kill any cubs that are not their own, they do this to induce female receptivity again. Neil observed the three foreign males calling and searching around, and when he picked up Krystal he found her walking away from the males, but her cub was nowhere to be seen. It was my job to get out their early that afternoon to do an observation session on Krystal, recording her behavior in this unfortunate situation. When I found her she was moving, this is unusual for lions in the mid-afternoon heat. She was constantly on the move, making contact calls as she went, it appeared that she was searching for her cub. Following her we returned back to the very spot at which Neil had seen the interaction with the male coalition in the morning, but there was no sign of the cub. I followed her through the dusk and into the night until I lost her in dense vegetation, she walked, sniffed the air and called the whole time, and still no sign of her cub. I had little hope that the cub was still alive.

The next evening, Krys and I tracked the lionesses again and found them back in an area of thick scrub, not far from where they had hidden their cubs originally almost 7km from where I’ve left Krystal last night. There we found Krystal resting with three other females (F5, F9, F10) and a cub! Excited at first, but unsure if the cub belonged to Krystal or another female, we waited, watched and took ID shots. The cub was having lots of fun jumping on the sleeping adults and chewing on their tails until they batted it away and then the cub would run back to Krystal, and then he began to suckle. It was soon clear after watching these interactions that this was Krystals cub and the ID photos of his distinctive whisker spots confirmed it. 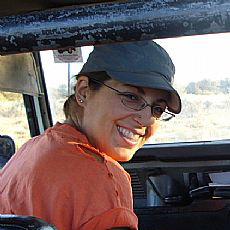