CREATURES THAT LURK IN THE NIGHT 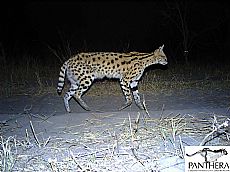 Northern Botswana has an abundance of wildlife and one of the most diverse carnivore guilds in Africa.  Hearing lions (Panthera leo) roar, leopards (Panthera pardus) saw, and spotted hyenas (Crocuta crocuta) whoop as you drift to sleep is one of the many pleasures and novelties of living in this incredible ecosystem.  But what other animals silently and covertly move about under the cover of darkness?  My dissertation research, focused on monitoring and conserving carnivore communities, is helping to shed light on this nocturnal world.  With the assistance of camera trap surveys, I will gain insights into the densities, distributions, and ecology of carnivore communities including elusive small and meso-carnivores such as African civets (Civettictis civetta), wildcats (Felis libyca), and aardwolves (Proteles cristata).

A heavily set 1 to 1.5 meter animal darts across the road and into the cover of shrubs.  It was black with white bands and blotches, an African civet!  I have only seen one civet but in just three weeks, my camera traps have detected this secretive viverrid 89 times.  Civets remind me of raccoons as they are a similar size and shape and share the distinguishing feature of a black mask across their eyes.  Also similar to a raccoon, they are omnivorous, feasting on fruits, insects, carrion, and vertebrates up to the size of a newborn antelope.  Individual civets have unique patterns in their fur, just like leopards, cheetahs (Acinonyx jubatus), and wild dogs (Lycaon pictus), which will allow me to estimate the number of civets residing within BPCT’s study area.

My car headlights illuminate what appears to be a domestic cat hunting mice on the floodplain.  That would be a wildcat, only distinguishable from its domestic counterpart by rufous, unmarked ears and longer legs.  Thousands of embalmed cats were retrieved from Egyptian tombs suggesting that the wildcat was domesticated as early as 4000 B.C.  Wildcats are widespread across Africa, as well as places in Europe and Asia, occurring almost everywhere that rats and mice are plentiful.  These small, cryptic cats appear to be abundant within BPCT’s study area as my camera traps have already detected wildcats 142 times!  One camera trap photo even caught a wildcat carrying its dinner, which appears to still be alive.

One of the silent, covert carnivores that I would be most excited to see is an aardwolf.  The camera traps have photographed them with their manes up as well as down.  When the aardwolf bristles its mane and tail, it can enlarge its silhouette by up to 74% which serves as an impressive defensive-threat display!  Aardwolves are one of the most specialized carnivores, dining almost exclusively on harvester termites.  This specialization allows them to consume a protein-rich diet with minimal effort and minimal competition from other predators.  Termites are located primarily by the aardwolves’ unusually acute hearing and once they are found, the aardwolf rapidly licks them up, mmm mmm.

There are many other silent, stealthy carnivores that move through the floodplains, mopane woodlands, and acacia savanna under the cover of darkness. The camera traps are showing that just because you don’t see something, doesn’t mean it is not there! If you are lucky, in the beams of your vehicle’s headlights you may see a serval jump into the air and pounce onto an unsuspecting rat, a caracal batting a sandgrouse to the ground, or the fearless honey badger using its knife-like foreclaws to unearth concealed prey. 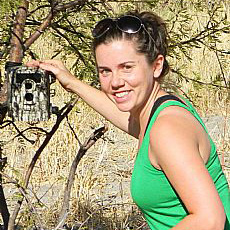