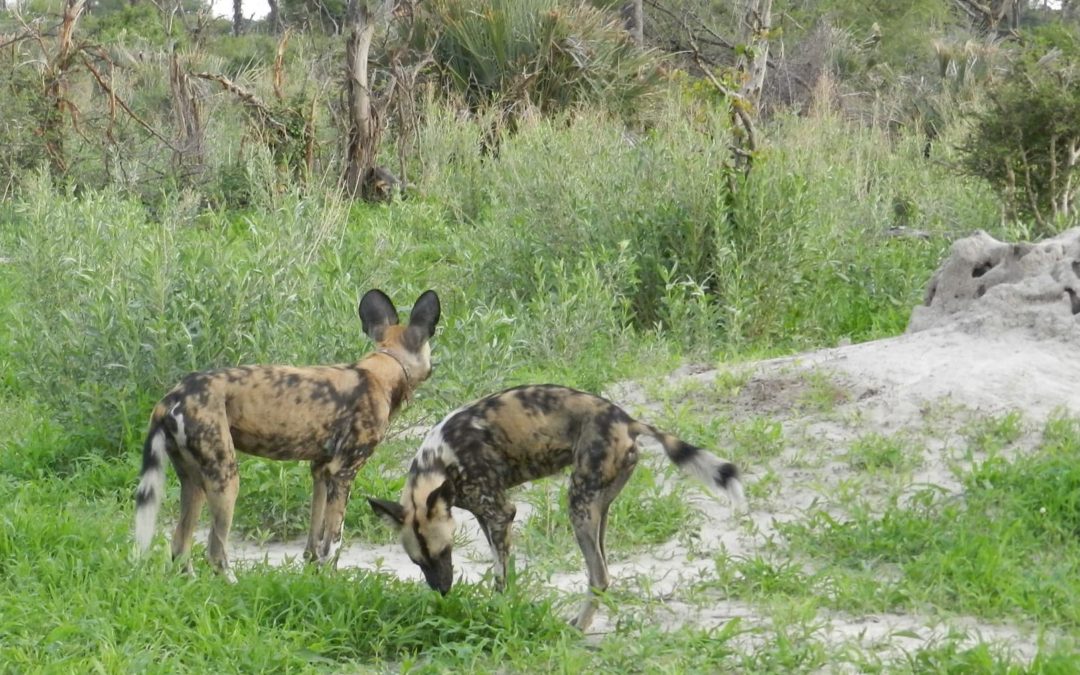 Old dogs die, sadly – and, with them, established packs extinguish. But in the intact African wild dog population that we monitor in Northern Botswana, young dogs take over with the passing of the old through the dynamic life history process of dispersal.

New packs form when dispersing single sex groups of brothers or sisters (usually littermates) leave their natal pack tofind and join opposite sex groups from elsewhere. Sometimes, however, new packs form when the old ones expire  – when the old founding pack members (the moms, dads and aunts and uncles) are all gone – enabling one group of siblings to stay and inherit the natal territory without the risks of dispersing – a changing of the guard, so to speak.

This year we have watched a few of our established packs disintegrate as old dominant dogs (sometimes as old as 10-11 years) die. When one of the pack’s dominant pair dies, and there are no  unrelated potential mates because all remaining pack members are closely related – the pack breaks apart –dissolves into single sex subgroups. It’s heart-breaking to see a pack we’ve followed for years dissolve, having known the pack’s founders from birth. But this natural process opens up the space and resources for new packs and the population.

We observed such an event last year when the dominant male “Stetson” (named in a hats-themed litter in Santawani, in 2008) died. He was the founder of the pack dubbed ‘the Hat pack’ which occupied the Xini floodplains of Moremi Game Reserve and was seen occasionally over several years coursing along the sandy tracks near Hippo-pools and Black pools and denning (unusually) in the open floodplains that dominate that area, well hidden in the long grass. When we first found the Hat pack we were so excited to see Stetson,a dispersed male who had been MIA for more than a year, paired up with the female,Bali, from the Mankwe pack (Bali was named in a litter of Indonesian islands in her natal pack Mankwe in 2010). Stetson and Bali were at a den with new pups AND a handful of yearlings reflecting their success already from the previous year before we caught up with them. Over the years, the Hat pack occupied their territory and successfully raised litters of pups in four consecutive years. Avery successful pack! But in June 2017, when I learned the sad news that  9 year old Stetson had died, I knew this marked the end of an era.

Left behind, however, was Stetson’s mate,Bali, and their sons and daughters of varying ages. And soon after Stetson died the sons all dispersed and were later found associating with some females in northern Moremi – a union that didn’t last long and following which we lost track of them altogether. The Hat pack females, however, including Bali, were joined by a group of males from the Santawani pack which established the start of a new pack we call the “Beanie” Pack.

This year we have also recorded the fascinating dispersal of several young adults from our monitored study population; one of which undertook an astounding 370km trip in 17 days that basically circumnavigated from East to West the Okavango Delta. By comparison, some other dispersed groups found mates in territories right next-door. The outcomes of dispersing young wild dogs is typically very difficult to confirm, because they are simply recorded as missing from their natal pack. At an estimated 20% per year, natural mortality is high for wild dogs. So when a single young dog disappears we might never know if it has died/been killed or it has left to seek mates elsewhere. However, when young dogs (between 1-3yrs) disappear with same sex others, usually with littermates,we assume it likely they dispersed. On occasion we receive photos of wild dog sightings from tourists and guides that confirm these assumptions and inform us where these missing but individually recognizable dogs ended up. Sometimes this enables us to reconnect with monitoring their post-dispersal ranging and reproduction. Now, with advances in radio-collar technology however the industry has finally provided a satellite collar at an acceptable weight for African wild dogs and we, together with scientists from the University of Zurich (www.popecol.org), have been able to track these dispersal movements more closely. 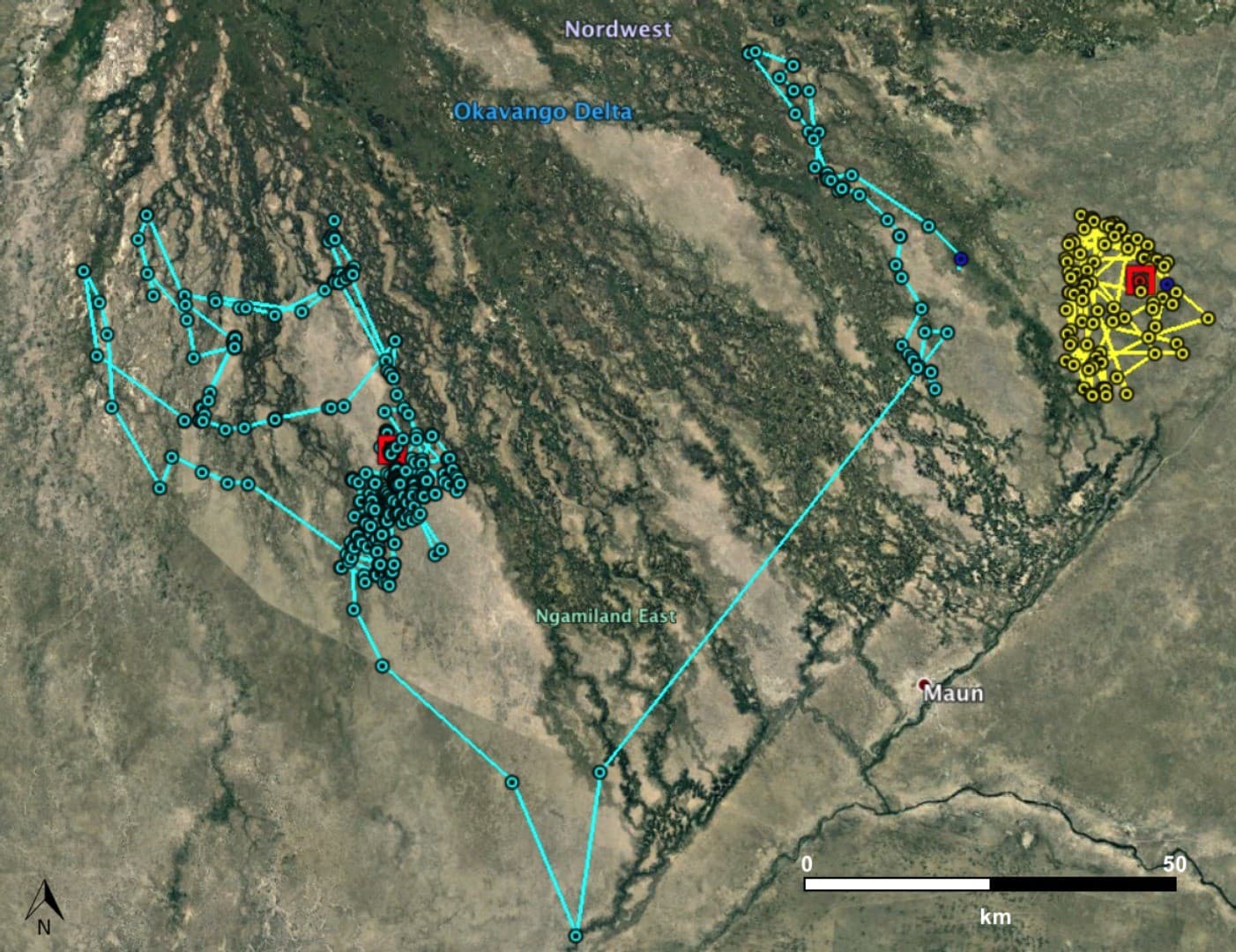 Dispersal route: Blue line shows dispersal route of a male wild dog, with the home range of natal pack in yellow for comparison of distances and movement. NB. Straight line trajectory is when GPS fixes are missing.

Clearly, there is a bonus attached to inheriting a natal territory as we saw this year with the new Beanie Pack.  Sadly, however, 8 year old Bali disappeared in April, leaving her young daughters to carry on. One of these females, Gobi, emerged as the new dominant with one of the new males Katavi from Santawani, inheriting her natal range with her sisters, and have thereby filled this central gap resident population in Moremi Game Reserve. And the lineage continues. You have to take your hat off to them. Really. 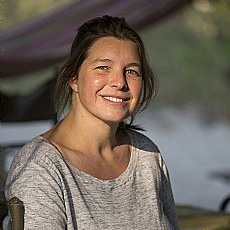