Let’s go back to 2013 when the Hat Pack, a newly formed African wild dog pack had just had pups. One of these pups was a female, Suzuka, one of 9 pups; 6 females and 3 males. The adults of the pack all hunt to feed their pups as their survival means the continuation of their genes and genealogy. By one year of age, Suzuka still has 6 siblings; a better than average survival for young wild dogs, though curiosity and inexperience had taken a toll on the 2013 litter. 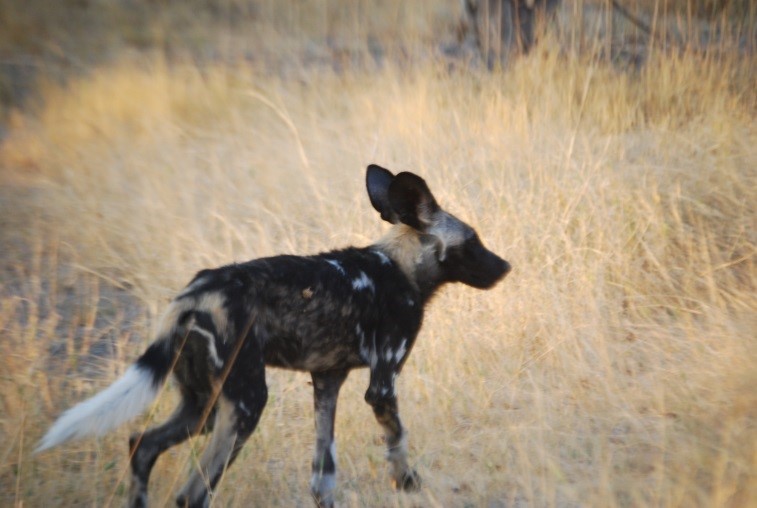 In 2015, when she and her litter mates were two years old, Suzuka left her pack, her family with 3 sisters to fulfill that innate desire to start their own pack and raise their own pups. Reports of her and her sisters after that are limited to only one confirmed sighting of her among what looks like a new pack 40km North, in the Khwai area, in 2016. Back home, Hat Pack continued to hold their turf until 2017 when the dominant male, Stetson,died. This resulted in the old Hat Pack fragmenting, and formation of a new pack, the Beanie Pack, consisting of Suzuka’s younger sisters and some new males in Hat Pack’s old territory, ringing us to the present, the end of 2018.

A few months ago, we captured 3 dogs on one of our monitoring camera traps in the central part of our study population. One of these was identified after searching our database as Suzuka. Surprisingly, she had returned after 3 years. Home – or nearly, we had actually photographed Suzuka in the territory of a neighbour pack of Hat Pack/now Beanie Pack. But ‘Why was Suzuka back?’ Maybe she was not the dominant female in her Khwai pack,therefore not herself able to reproduce directly, and -perhaps – this resulted in secondary dispersal where Suzuka went looking for her own mates to start a pack in which she would be dominant. Or perhaps she left with younger females from the new Khwai Pack, her nieces, who by 2018, may have been reaching dispersal age.

To answer our questions, at the very least we needed to find Suzuka again. We know that this may be unlikely as dispersal carries with it considerable risk – pretty much true for any large predator. It is dangerous owing to few or no supporting group members and to the unknowns encountered traveling through unfamiliar territory. Dispersal as an itinerant is a critical life history event that makes one especially vulnerable. And one of the biggest threats to any wild dog, dispersing or not, is ambush by lions.

Lions: Throughout the period when Suzuka was born, grew up, dispersed, helped start a new pack in Khwai, and then left that pack, the study area lions were also thriving in the study area. We have been monitoring the lives of these lions since 2007 and the local pride around our research camp, the Santawani pride, now consists of 5 adult females. SaF03 (Santawani-Female- 03), Female 3 for short, is the queen. She is the primary breeding female, mother of three of the other adult females, Twee, Mowana and Mochaba. We don’t know her exact age because she was an adult when we found her, but we estimate she is around 14 years old. Her eldest cub in our records,Twee, is now 10 years old. All four are reproductive. They currently have 8 cubs between them. All but one of the other females born into this pride since 2007 have dispersed or died as new adult males took over. The one other is SaF05, Female 5, known to the local safari guides as Mma Moriri (Mrs. Hair). 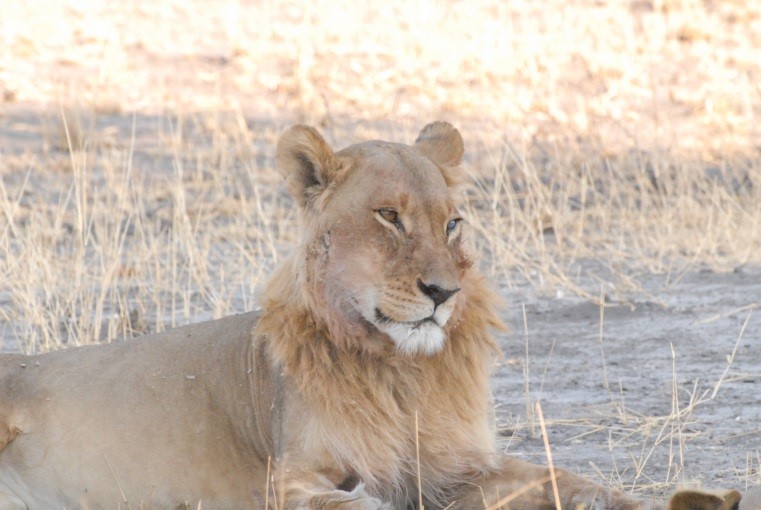 She is the bearded female of the Santawani pride. We have known a few of these in the region but she is the last surviving bearded female we know. She is an enigma. We do not know why she has a mane (albeit a small one). She may be an androgenized female with high testosterone. What we do know is that she is larger than other females and her behaviour is different. She is more aggressive, she has been observed mounting other females, but also courting and mating with males. She has been observed taking down an adult zebra solo, and killing neighbouring prides’ cubs – behaviours more typically associated with adult males. She is probably infertile. The many times we have observed her mating have borne no offspring. We often find her alone, but also associating with Female3. We believe them to be sisters, as Female 5 appeared slightly younger than Female 3 when we first observed them. Whatever she is, she is formidable, a force to be reckoned with. 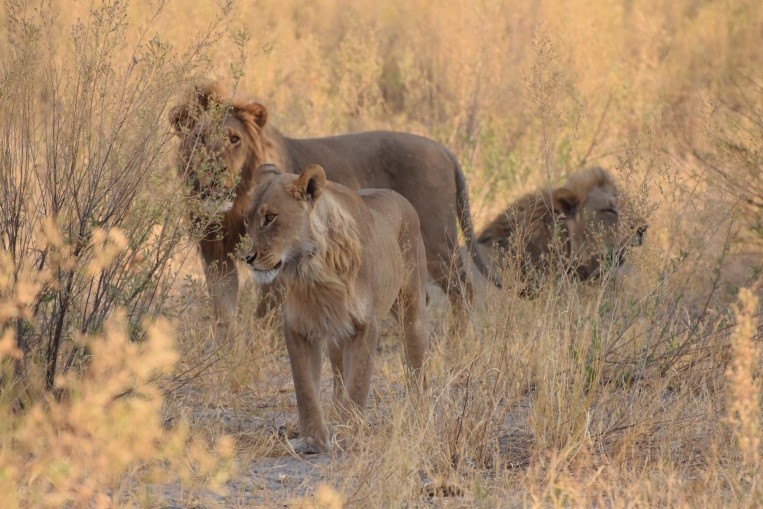 Back to Cat and Dogs: October 2018, we heard wild dogs’ ‘hoo calling’ throughout the night around camp. Checking the VHF radio collar signals, we confirmed it was Apoka pack. But why all the commotion? Perhaps the group of 3 dispersers were having an interaction with the pack, the females trying to draw the males away? Early the next morning we went to locate Apoka to see what was happening. But on our way out first thing, we came across a different story. One lone wild dog, injured but alive, lying next to Backyard pan (not 1km from camp) surrounded by lion tracks. The dog was a female, and not from Apoka pack. An assessment revealed injuries typical of a lion attack. She had puncture wounds on the top of her head, her jaw, her neck, her chest, her shoulder, her thigh. Her lower back had been mauled. Her spine appeared to be broken. She could not stand. Dazed, she only let out deep breathes as we stood a few meters away. It general management policy in Botswana not to intervene when nature takes its course. This was difficult and became even more heart-breaking when we identified the fatally injured dog as Suzuka.

So what happened? From the commotion the night before and the story described in the footprints of both lions and dogs, and the presence of the Apoka pack last night as well, we can make an interpretation and guess at the events. It seems the two sets of dogs were indeed having an interaction, a rare occurrence in our records. Such interactions can be chaotic and frequently are aggressive and full of risk for the dogs. In the middle of this nocturnal conflict, it seems Suzuka and the other dogs with her were traveling on a narrow game trail, and were ambushed by lions from a short distance away. One lion turned 90 degrees and went straight for the narrow game trail with the dogs and ambushed Suzuka. One set of dog tracks ended at Suzuka’s injured body,the others scattered. The lion tracks continued east. At the end of the lion tracks a few kilometres away sat Female 5, uninjured, unfazed, as if nothing had happened and within a few hours Suzuka was dead where she lay. The next morning, only a bone fragment remained in a confusion of spotted hyaena tracks. 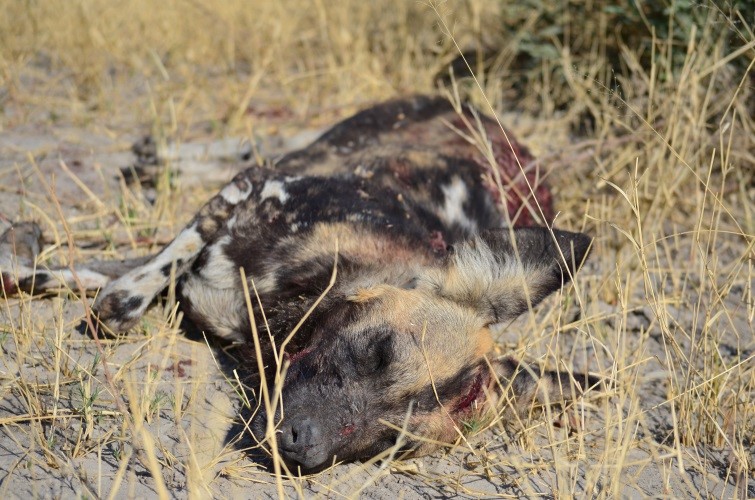 So, the Cats vs Dogs scenario, reversed from the typical domestic relationship, here has a predictable outcome: a single lion vs. a single dog is a bad bet for a dog. Dogs find their strength in numbers when it comes to lions. Add to this night-time scenario all the confusion and distraction of dogs in the middle of a rare and dangerously chaotic social interaction, when two unrelated groups meet, the advantages for the more nocturnal cat were many. The sad end of Suzuka’s life is an example of what can happen when two top predators living their separate but overlapping lives end up meeting; one ended the other’s run. Next time, under different circumstances, the outcome may be different. The wild dogs may just get away.