A NEEDLE IN A HAYSTACK 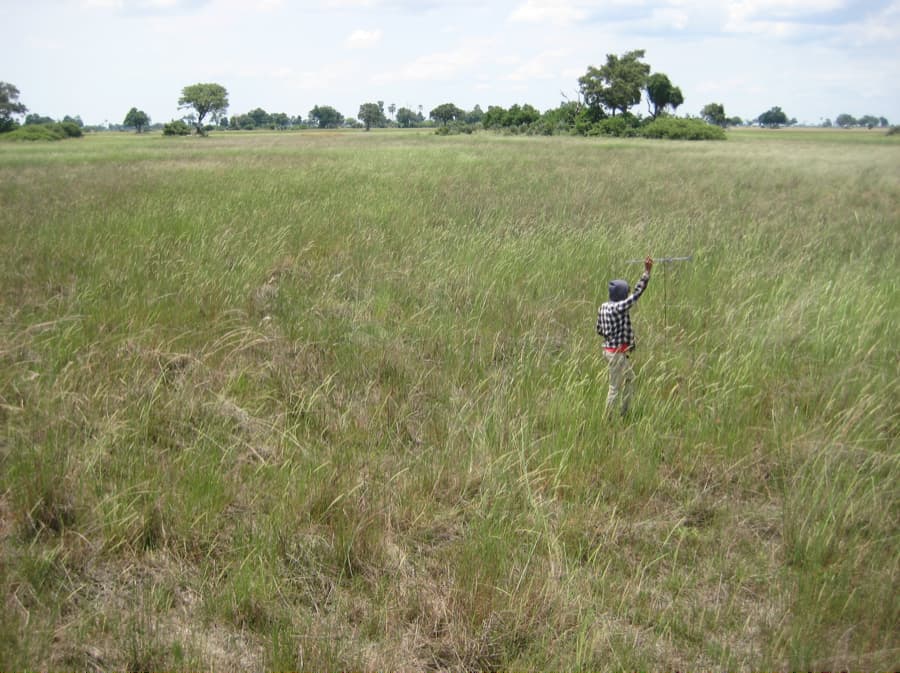 Happy New Year from Wild Dog Camp and the rest of the Botswana Predator Conservation Trust! My wife Carli and I recently returned to the field after a wonderful holiday leave in the States. Back in Botswana, we were immediately hit by the humidity and relative greenery of the place we left in December. This rainy season, however, has been exceptionally dry…as we drove out of Maun towards our camp, we crossed over the nearly parched Thamalakane River, and chatted with numerous Motswana who expressed their worry about the implications of this “wet” season’s lack of rain.

Once we had settled back in at Dog Camp, Kas (a long-time BPCT team member and currently completing his PhD in leopard behavioral ecology) announced his plan to try to recover a leopard collar that had prematurely fallen off the animal some months before. The task was not trivial: the last known location from the collar was from a cluster of aerial fixes (thanks, Tico!) located over 40 km away as the crow flies through the bush and across the Gomoti River’s main channel. Retrieving the collar would not only keep rubbish out of the bush, but would enable Kas to download months of detailed activity and movement data from Molelo, the adult male leopard who had once worn the collar.

Naturally, I volunteered to accompany Kas on the collar recovery mission…it would be a great chance to catch up after a month of my absence from camp, plus it would provide us both with our first on-the-ground look at the northern portion of the Chitabe area, in the NW corner of BPCT’s study site. We met at 0530 the following morning after prepping Mopane Worm (Carli and my trusty old diesel Land Rover) for the off road mission that lay ahead. By 0600, we were underway and headed along the Gomoti Cutline to the main river channel. When we arrived there about and hour later (~10 km), we were surprised to see that the main channel was completely dry! Just a few remnant pockets of water were left in the elbows of the riverbends, and here we saw huge concentrations of Maribou storks, spoonbills, white pelican and others taking advantage of the easy pickins. These birds were enjoying a riparian feast on the fish, frogs, and invertebrates that were squeezed into the tiny remaining pockets of water.

We continued on, crossing the main Gomoti River channel on completely dry sand. Perhaps driving to the cluster of collar coordinates from Tico would be a bit easier than the swampy epic trip we had both envisioned! After another hour or so, we reached the northern extent of the Chitabe road network (i.e. established safari vehicle tracks). We were still only halfway to the cluster, and the most challenging leg of the voyage lay before us: 20 km of offroad driving through unknown terrain. Fortunately, we were able to slowly navigate NW through the dry floodplain, although huge elephant craters and thorny palm fronds presented a continual challenge to avoid. Finally, after plodding along for 5 straight hours and overheating a few times, we arrived at the cluster area and started the search for the collar. Kas stood on the Worm’s roof with the VHF tracking gear to try to pick up any signal from the downed collar. We both had our fingers crossed that it might have just enough remaining battery for us to detect its nearby ping. After a few attempts at listening, we heard nothing…then started to come to grips with the fact that we’d need to spend the next few hours diligently searching on foot for an old, dead collar in tall grass.

We moved meticulously between the cluster of GPS fixes, combing the ground visually like bloodhounds trying to pick up the faintest scent. Kas kept trying to detect the collar through the VHF gear, and good thing…eventually, he picked up a faint signal! It was a huge relief to both of us. Now, instead of searching somewhat randomly over a large area, we had a signal that provided direction and strength (approximate distance). Within just a few minutes, we were out of the truck again, but this time with tracking gear in hand taking us right to the collar…over 800 meters from the most recent aerial fix. We would have never found it without that faint signal, but there it was! The leopard collar was mostly intact and lying on the ground, fortunately with the solar panel somewhat exposed to the sky. If it had fallen off Molelo in a thicket, the battery would have surely been dead by now and we would have had almost no chance of recovering the collar.

We were obviously elated by the discovery and that fact that the epic journey had not been without success. We stopped for a quick lunch of tuna and crackers along the banks of the (flowing!) Guekha channel, then plodded along south-east for another 5 bumpy hours before arriving back at camp for a celebratory camp-wide game of volleyball. Just another day in the bush…