A dozen dogs and a big cat; observations of hunting 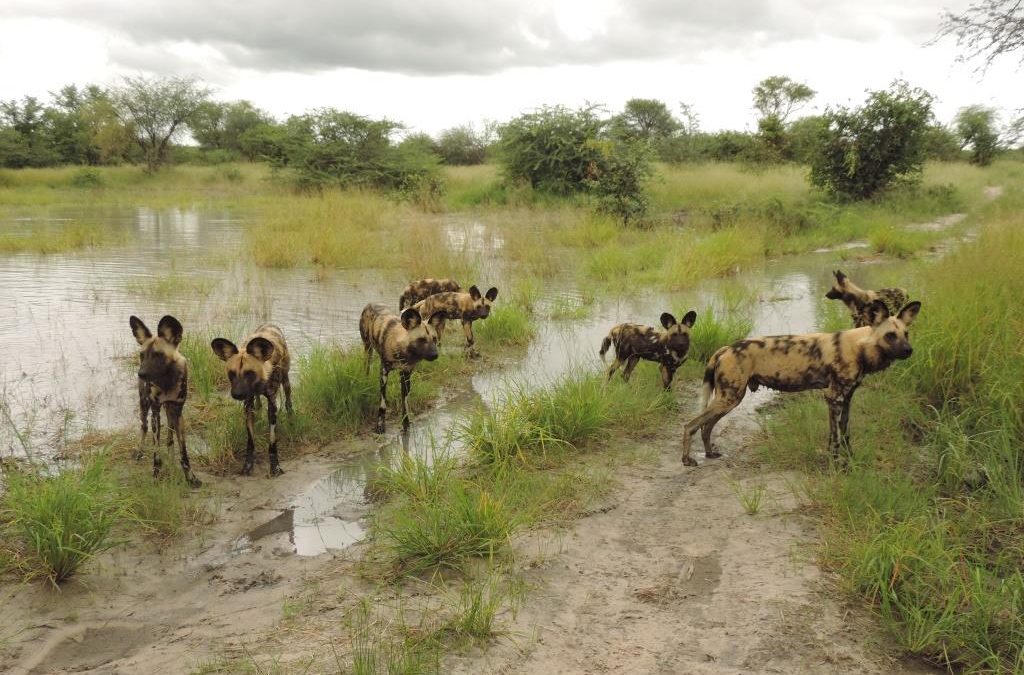 Despite observing large carnivores on a daily basis, it’s still quite rare to see the entire process of a kill. Thick brush, fast-moving prey, and darkness are just a few of the common struggles we must overcome in order to witness a predator earning its name. Every so often though, through a combination of both luck and skill, we catch a glimpse of the incredible power that our study species’ reserve for mealtime. Over the last month, I’ve been fortunate enough to observe two different kills, both very different from each other, and both providing key insight into the hunting strategies of our resident carnivores, as well as the defensive maneuvers of their prey.

The first kill was courtesy of a pack of African wild dogs commonly seen in the area surrounding Dog Camp. It was late afternoon and Neil and I had been with the dogs as they rested under Mopane trees through the hottest part of the day. Around 5:00pm, the “rally” began. The rally refers to a short period of excitement after the dogs extended mid-day siesta and before their evening hunt. Usually initiated by the fast-growing and ever-hungry pups, the rally includes copious amounts of scent-marking, vocalizations, and play behavior, leading to an overall sense that a hunt is about to take place! As the dogs left the area in search of food, led by the dominant male and female, Neil and I quickly collected some of the scent-markings for analysis and hopped back in the car in order to follow their pursuit.

Following African wild dogs while they hunt can be an extremely hectic endeavour. They move very quickly as a group and when prey is spotted they begin to course, splitting up, searching woodland patches, and finally reaching a full sprint in order to run down and corner their potential meal. This strategy of hunting generally has quite a high success rate, yet due to the rapid changes in direction often in dense brush, it’s also one of the most difficult to witness in person. Using telemetry sets to locate the strongest signals, Neil and I positioned us alongside the dogs as they trotted across the landscape. All of a sudden at one point several of the lead dogs split up and broke into a sprint, an indication that they had locked in on something. We lost visual contact with them and so decided to reposition the car in what we felt may be their direction of travel. Amazingly, the decision paid off, as perhaps a minute later we saw an adult female impala running towards our car. She had several dogs on her tail and made a sharp right turn into an acacia bush only a few metres to our left. At that point, one of the dogs had a hold of her leg, though the long thorns of the acacia seemed to force him to let go. However, when the impala burst through the other side of the bush, other adult dogs were already upon her. It was an almost instantaneous process, lightning fast, as every dog descended on the unfortunate antelope. Once the adults had managed only a few small bits of food, the pups arrived on the scene and the adults immediately surrendered the kill to them. The vast majority of the kill was in fact left to the pups, while some adults waited close by for the pups to finish, and others left to search for more food for themselves. This “youngest feeds first” phenomenon is a common occurrence in African wild dogs, one that we’re currently investigating in detail. Overall, it was an incredible sighting, since the kill took place very close to our car, and since we were able to document the entire process of the hunt, from the rest and rally, through the coursing, encounter and chase phases, and eventually to the successful kill and consumption of their prey. It was also the first kill I’ve personally ever seen and therefore something I’ll always remember.

The second kill I witnessed this month was a very different experience, as the predator was a male leopard we have named Charles (after Charles Lindberg, following our tradition of naming  leopards after pilots). Charles is also often found in the immediate area around Dog Camp, yet on this particular afternoon he happened to be deep into the Acacia scrubland that dominates the landscape to our south. With seeds from the tall grass continuously filling my radiator and overheating my engine, and the signal on his collar remaining consistently inconsistent (indicating him moving), the tracking process took several hours. Thankfully, as the mid-day sun had finally settled in a golden aura on the acacia studded horizon, the oppressive heat had vanished leaving a much-welcomed coolness in its place. This is my favorite time of day. As dusk approaches in the Okavango Delta, the magical nocturnal orchestra begins. Cicadas and katydids highlight the string section. Pearl-spotted Owlets, Vereaux’s Eagle-owls, and African bullfrogs arrive with the woodwinds. Lions roars in the distance, a magnificent crescendo.

I managed to find Charles before dark. He was in a towering acacia tree. It’s commonly agreed that a leopard resting in a tree, silhouetted against the peach-hued African sunset, is among the singularly most beautiful images in nature. With such a scene before me, and with the enchantment of the nighttime orchestra nearly in full swing, I was overwhelmingly reminded just how incredible this place is and how lucky I am to be here. Charles wasn’t done with the show, however; he was hungry. With the flowing grace and clarity of movement that only cats possess, he stood up, stretched, and lowered himself onto the ground. Leopard hunts are far easier to follow then dogs hunts, utilizing patience and surprise to sneak up on unsuspecting prey. After perhaps only 100m, I saw Charles crouch down in the grass. He’d seen something. I turned my engine off and stared intently ahead of me, waiting for the right moment. All of a sudden, he pounced (or moused as some people call it), and I realized why I hadn’t seen his target. With all four feet off the ground, his front-half dipped downward and his whole body softly landed onto a family of guinea-fowl. All of the birds, except for one, flew up into a tree with a cacophonous riot of alarm calls. One wasn’t so lucky though and was quietly and efficiently consumed right in front of my car. It was an amazing sighting, as I was able to witness the full adaptive skill-set of a classic ambush predator.

At the Botswana Predator Conservation Trust, we use sightings such as these in order to learn more about large carnivore behavior in Africa; and we are accumulating quite a large dataset now over the years. While witnessing the entire process of a kill is rare, it remains an integral part of our work in aiding the conservation of the predator guild. Hopefully, with the wet season drawing to a close, easier off-roading conditions are ahead and will lead to even more observations as useful and exciting as these.